From the title, El Dorado, you would never know this is the sequel to one of my favorite books, The Scarlet Pimpernel. I was clued in by Glen at Free Listens (who sadly seems to have stopped blogging). If it is possible for the reader of the book to be better than the book itself, then that is the case for this particular audiobook. Karen Savage has a solid voice, good inflection AND pronounces the French words beautifully. The opening chapters were slow and monotonous (Savage bemoans this on her own blog), but her lovely voice kept me going.

The first half of the book is about Armand, brother-in-law and fellow conspirator to Percy Blakeney (a.k.a. the Scarlet Pimpernel). He makes some foolish choices that jeopardize the Pimpernel’s plans to free the heir to the French throne from prison. Blakeney steps in to save the day and when he makes his appearance, the story finally becomes as engaging as the original book.

This is not primarily a romance, but I loved how Sir Percy referred to his wife, Marguerite, as “dear heart”. I appreciated her complete willingness to trust him and to die for him, if need be.

There was plenty of Christian imagery in this book, which I didn’t recall from the first one. Blakeney is compared to a savior and after his imprisonment is described as one “on his way to Calvary”. When Armand fouls up the plans, he calls himself “Judas” and feels the only way to redeem himself is to give his life for Percy. Fascinating vocabulary. The writing, too, was exceptional at times. The image of the young dauphin being forced to trample and spit on the flag of France was vivid and heart-rending.

I enjoyed this book very much, but don’t know if I would have gotten through the clumsy beginning if it hadn’t been for the excellent narration by Ms. Savage. Kudos to her for doing such a great job! Here’s the link if you’d like to download it from Librivox.
Posted by hopeinbrazil at 1:45 PM

I've listened to this,too. Karen Savage is one of my favorite Librivox readers.

I loved the Scarlet Pimpernel and have never gotten around the reading the other books. I think I'll give this one a try and know that I have to stick with it through the first few chapters. Thanks for the review!

I am so glad these books are making a comeback. For years they weren't available. This book along with the first in the series are what the 1982 (?) movie with Anthony Andrews and Jane Seymore was based on. I have to read this book. Thanks for the review! 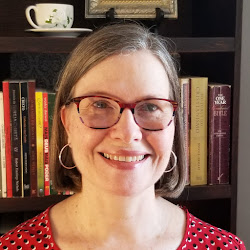