A Pair of Blue Eyes by Thomas Hardy

I have thought and thought about how to review A Pair of Blue Eyes without giving away the story line.  But it's almost impossible. The title is deceptively lighthearted, but the story is not. A young inexperienced vicar's daughter gives her heart to the first eligible man she meets. When her father forbids the marriage based on the young man's poor family connections, the suitor goes away to try and better himself. Meanwhile the young woman meets another man who is much more her intellectual and social equal and the trouble begins.  It's a love triangle that ends quite badly.

Honestly, I could hardly put this book down.  I kept wondering, Would Elfride do what was right? Which man would win her heart? Was one of them really more worthy than the other? Was Elfride ever going to show any backbone?  Dozens of similar questions haunted me throughout the book.

Although it may sound like it, this is no fluffy romance and the ending will surely disappoint the "happily ever after" crowd.  Still, I can't say I didn't like it.  The repartee between Elfride and Mr. Knight is delightful.  And Hardy is by far the best Victorian writer that I've read so far this year.

Here are a few examples:

"He drew himself up with the sensitivity of a snail."

"The churchyard was serrated with the outlines of graves."

"But Elfride possessed special facilities for getting rid of trouble after a decent interval.  Whilst a slow nature was imbibing a misfortune little by little, she had swallowed the whole agony of it as a draught and was brightening again.  She could slough off a sadness and replace it by a hope as easily as a lizard renews a diseased limb."

Give Me This Mountain by Helen Roseveare

Helen Roseveare was an English medical missionary in the Belgian Congo (now Zaire) from 1953 to 1973, but her stories reach a much broader audience than most missionary biographies.  I have long thought that Roseveare's four other books (Living Sacrifice, Living Faith, Living Holiness, and Living Fellowship) should be required reading for every Christian.  In spite of the silly subtitles (which somebody added later), these are serious books about what it means to be an earnest follower of Christ.  Give Me This Mountain covers her first tumultuous years in Africa (from 1953 to 1965). He Gave Us a Valley is the sequel.

When Helen became a Christian, a pastor wrote Phillipians 3:10 in her Bible: "That I may know him, and the power of his resurrection, and the fellowship of his sufferings, being made conformable unto his death." The words were prophetic.  Through all her years in Congo Helen learned to know the fellowship of his sufferings.  But instead of being defeated by troubles, she grew in her knowledge of God and his faithfulness.  She learned the power of his resurrection as she was delivered from death many times.

Roseveare is disarmingly honest about her struggles and weaknesses. And she is very quick to give God all the credit for enabling her to do what he called her to do.  Her example will inspire you, too, to have a tender, obedient heart.

The Carved Lions is another title from my personal Victorian challenge.  It was published in 1895 and is the story of a little girl sent to an English boarding school because her father has been assigned a job in South America.  She’s very unhappy, but manages to squeeze a cheerful ending out of all of her trials.  (The definitive book with the same theme is, of course, Frances Hodgson Burnett’s A Little Princess, which had been published seven years earlier.)

There was nothing dreadfully wrong with this book.  It was not overly didactic or moralistic - even though young Geraldine reads quite a few preachy books that were popular in the 1850’s.  My main complaint against the book is that Geraldine is an unappealing heroine. As narrator, she makes too many excuses for herself and for the faults of others. All the mistakes she made in her school had to do with her being sick and not hearing well, or being naive and not responding well.  She never seems quite real.  Or likable.

The end of the book contained fascinating reviews written during Moleworth’s lifetime:  “Christmas would hardly be Christmas without one of Mrs. Molesworth’s stories.  No one has quite the same power of throwing a charm and an interest about the commonplace everyday doings as she has, and no one has ever blended fairyland and reality with the same skill.”  Her stories were referred to by one Victorian critic as “neo-fairy” stories. Another referred to her as “the queen of children’s fairyland.”  The words “healthful moral tone,” were often used to describe her writing.

That last phrase made me wince since I'm suspicious of any author who sets out to write a book to teach children something. I don't mind books with a healthful, moral tone, IF they don't make me feel like I'm taking my vitamins.

Chesterton mentions Mrs. Molesworth in his The Victorian Age in Literature as a writer of true talent and compares her with two other writers for children, Juliana Ewing and Charlotte Yonge. (p. 32) Both Ewing and Yonge are on my list to read this year so I look forward to comparing them myself.

Posted by hopeinbrazil at 4:37 PM No comments:

Quote on How Books Shape Us 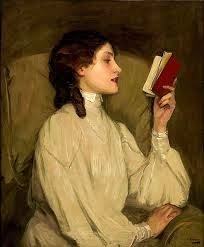 "You will be the same person in five years as you are today except for the people you meet and the books you read."

I like this quote because I agree that good books shape us.  Life experiences do to.  Ultimately, God uses books, people and experiences to do the shaping - if we let Him.
Posted by hopeinbrazil at 4:38 PM 1 comment: