Poems of Faith by Bob Blaisdell

I am always in pursuit of good Christian poetry. Not the sing-song-y drivel that is often passed off as "inspirational," but the meatier stuff that is theologically sound and painfully honest. Here is an example of the fluffy kind:

The priceless gift of life is love,
For with the help of God above
Love can change the human race
And make this world a better place
For love dissolves all hate and fear
And makes our vision bright and clear
So we can see and rise above
Our pettiness on wings of love.

You'll find nothing of that kind in Poems of Faith, edited by Bob Blaisdell. He has deftly chosen solid poems about faith by the best authors of the last 400 years. Some were familiar to me (Robert Herrick, Francis Quarles, George Herbert) and others were discoveries (Christopher Harvey, John Day, etc.) Most of them reveal a deep longing for God in their writings.

Quarles (1592-1644) beautifully describes his heart as Like to An Arctic Needle, concluding that Christ is his true North.  Christina Rossetti affirms her helplessness apart from Christ in None Other Lamb. And John Newton reminds us of the irony of the cross when he writes:

Thus, while his death my sin displays
In all it's blackest hue
(Such is the mystery of grace),
It seals my pardon too.

A few poems go on for several pages and will be off-putting to our present (attention span-deficient) generation. The old-fashioned language may be a struggle unless, like me, you had the privilege of hearing King James English as a child. Nevertheless, Blaisdell's book is a good introduction to some of the best devotional poetry in the English language. If you enjoy it, you may want to go to the next level with these lengthier, even meatier tomes: The Oxford Book of Christian Verse (1940 version) and The One Year Book of Poetry. (The latter is surprisingly cheap for a used copy.)

Posted by hopeinbrazil at 5:30 AM 4 comments:

News of the World by Paulette Jiles 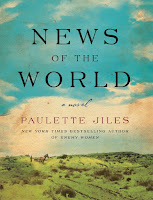 I rarely read modern fiction, so I'm not quite sure how this book landed on my radar. But I'm glad it did.

Seventy-one year old Captain Jefferson Kidd is travelling through Texas, carrying "the news of the world" to small towns where folks will pay a dime to hear him read the papers. It's just after the Civil War and, in many ways, Texas is the wild west. Kidd had hoped that sharing stories from all over the world would help bring unity to divided people: If people had true knowledge of the world perhaps they would not take up arms and so perhaps he could be an aggregator of information from distant places and then the world would be a more peaceful place. He had been perfectly serious. That illusion had lasted from age forty-nine to age sixty-five.

In one city where he stops, his offered $50 to deliver an orphan to her people who are 400 miles away. The girl had been kidnapped four years earlier by a band of Kiowa Indians and had recently been rescued by the U.S. Army.  Kidd names the ten-year old Johanna and promises to take her safely home. As they travel together, warding off bandits and busybodies, they learn to communicate and to build a friendship that brings healing to both of them.

Kidd had become indifferent to humanity. Now it was different. He was drawn back into the stream of being because there was once again a life in his hands. Things mattered. The strange depression and spiritual chill he had felt were gone. . . . Joy and liveliness had come back to his readings now. His voice had its old vibrancy again and he smiled as he read; . . . . [he] recalled how dull his life had seemed before he had come upon her in Wichita Falls.

The exquisite writing was balm to my soul. Jiles helped me to see and hear the settings and the people when she wrote that someone was as "freckled as a guinea hen" or that "His pen nib scratched across the newsprint with a noise like avaricious mice." Some turns of phrase were so apt and lovely that I laughed out loud with sheer joy.

She also does a wonderful job establishing the historical context, adding details about post Civil War conflicts, the economy, the laws (or lack of them), Kiowa Indian customs, and more. But it was never an overwhelming amount of details. The clash between the Kiowa and the white man's cultures is handled with skill and without pat answers.

The denouement in the final chapter was spot on. The reader learns that it isn't the big "world" news that changes people, but the daily sacrificial offering of one's life to another.

In spite of the occasional profanity (none of it felt gratuitous), this is a beautiful story of grace in the midst of brokenness. The narrator at Audible, Grover Gardner, had the perfect gravelly voice for this book. I look forward to revisiting this novel in the future.

Posted by hopeinbrazil at 6:28 AM 6 comments:

The Overcoming Life by D.L. Moody

Dwight L. Moody wrote The Overcoming Life in 1886 to encourage Christians in their spiritual warfare against sin, self and the world. He lays the groundwork for the book with several statements: It is folly for any man to attempt to fight in his own strength. The world, the flesh, and the devil are too much for any man. But if we are linked to Christ by faith, then we shall get the victory over every enemy. (p.5) And, My friend, you and I have got a terrible enemy to contend with. Don't let Satan deceive you. Unless you are spiritually dead, it means warfare.  (p. 9)

First he addresses internal foes (pride, uncontrolled appetites, envy, etc.) because an enemy inside the fort is far more dangerous than one outside. Then he talks about outer enemies such as persecution and worldly pleasures. Sprinkled throughout are homespun illustrations. I especially enjoyed this one: Perhaps you say, "I hope Mr. Moody is not going to preach on that old text." Yes, I am. When I take up an album, it does not interest me if all the photographs are new; but if I know any of the faces, I stop at once. So with these old, well-worn texts. They have quenched our thirst before, but the water is still bubbling up - we cannot drink it dry. (p. 62)

The last chapter was on the seven "I Wills" of Christ. I have heard of the "I Ams" of Christ, but these were new to me. The first was "He that cometh unto me, I will in no wise cast out." Another was, "Follow me and I will make you fishers of men." Each of these, said Moody, are promises for all believers. It was a fitting ending to the 83-page booklet.

I am used to the eloquent writings of A.W. Tozer and Andrew Murray, but really enjoyed D.L. Moody's more down-to-earth prose and his solid biblical teaching.

Appreciations and Criticisms of the Works of Charles Dickens by G.K. Chesterton

Even though the title is a mouthful, this book isn't as hard to understand as many of Chesterton's other works. Appreciations and Criticisms of the Works of Charles Dickens is simply a compilation of introductions that G.K. Chesterton wrote for each of Dickens' novels. He reviews the books in chronological order and shows how Dickens developed as a writer. He praises Dickens' genius while at the same time commenting on some of the weaknesses of his works.

Some samples of his commentary:

Oliver Twist is by far the most depressing of all his books; it is in some ways the most irritating; yet its ugliness gives the last touch of honesty to all Dickens' spontaneous and splendid output. Without this one discordant note, all his merriment might have seemed like levity. (p. 39)

What I loved the most was this observation: All of Dickens' books are Christmas books. All of them have the element of drama, of waiting anxiously for something to happen, "a crisis of happiness" (advent). Secondly, they all take place in the "winter" of hardships where characters manage to celebrate in spite of the cold. And thirdly, is the element of the grotesque. Poets and painters have striven to express happiness by means of beautiful figures. Dickens understood that happiness is best expressed by ugly figures: the corpulence of Tony Weller and the red nose of Mr. Stiggins.

He goes on to describe The Christmas Carol as the best of the Christmas books because it has those three elements in spades: the sudden conversion of Scrooge, the winter scenes, and the undignified rejoicing of Scrooge's final happiness. The turkey that Scrooge bought was so fat, says Dickens, that it could never have stood upright. That top-heavy and monstrous bird is a good symbol of the top heavy happiness of the stories. (p. 112)

If you are not already a Dickens fan, you might find the book dry. But it made me want to read the whole canon. Also, each chapter contains spoilers so it's probably best to read the novels first and then see what Chesterton thought about them.