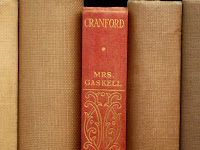 Some books make your heart race like a shot of caffeine. Others, like Elizabeth Gaskell's Cranford, are as soothing as a cup of hot chocolate. Do not read it unless you are perfectly relaxed or you won't be able to appreciate these simple, witty vignettes of small town life in 19th Century England.

The novel centers on the lives of half a dozen spinsters who live in genteel poverty. (The Cranford ladies have only an occasional little quarrel, spirted out in a few peppery words and angry jerks of the head; just enough to prevent the even tenor of their lives from becoming too flat. p. 2) It tells the story of their bravery and faithfulness to one another in the face of life's trials. The main characters are Miss Deborah Jenkyns, and her sister Matilda. "Miss Matty" has always lived under the shadow of her strong-willed sister and defers to her opinions in everything - even after her death.

Although naïve about finances, men, and the world in general, Miss Matty has a strong sense of right and wrong and is unshakable in her integrity. When she opens a small tea shop, she is determined not to take business away from Mr. Johnson's general store. Before she could quite reconcile herself to the adoption of her new business, she had trotted down to his shop, unknown to me, to tell him of the project that was entertained, and to inquire if it was likely to injure his business. My father called this idea of hers 'great nonsense' and perhaps it would not have done in Drumble, but in Cranford it answered very well; for not only did Mr. Johnson kindly put to rest all of Miss Matty's scruples, and fear of injuring his business, but, I have reason to know, he repeatedly sent customers to her, saying that the teas he kept were of a common kind, but that Miss Jenkyns had all the choice sorts. (p. 219)

Miss Matty, while considering herself completely inadequate, is at the same time a rock in the community because of her unwavering principles and her kindliness. Although I was frequently exasperated with her lack of gumption, I was finally won over by her quiet dignity and moral equanimity. She is proof of what George Eliot wrote in her closing lines of Middlemarch: 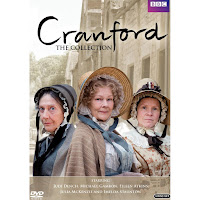 “the good of the world is partly dependent on unhistoric acts; and [the fact] that things are not so ill with you and me as they might have been, is half owing to the number who lived faithfully a hidden life....”

Miss Matty and her companions fail to live up to popular ideas of success and adventure, but they infuse their uneventful days with the joys of friendship and sacrificial love. I felt quite privileged to catch a glimpse of their richly mundane world.

This quiet little classic has been made into a lovely DVD series, which you will especially enjoy if you are familiar with the cream of the crop of the BBC's actors and actresses. Judi Dench plays Miss Matty, and the wonderful Jim Carter ("Mr. Carson" from Downtown Abbey) has a small role.
Posted by hopeinbrazil at 4:39 AM 3 comments:

Anecdotes of Destiny by Isak Dinesen

Isak Dinesen is the pseudonym of Karen Blixen (1885-1962), a Danish writer best known for her biographical work, Out of Africa. Her writing reminds me of Flannery O'Connor because of cryptic themes and disturbing imagery, but she is not nearly as gritty as O'Connor.

Anecdotes of Destiny contains five short stories. The first, "The Diver," is about a man who achieves unusual success as a pearl diver because he makes a bargain with the fish. There are many other confusing themes and sub stories in this one.

The next story, "Babette's Feast" is the most well-known story in the book and the least enigmatic of the five. A mysterious woman appears at the cottage of two spinsters and asks them to take her in as their maid/cook. The themes and sub-themes are decidedly Christian. I've seen the movie half a dozen times and have loved its message of lavish grace. The film and the story vary in only a few small points. What is explicit in the book is implicit in the movie and it works better that way because the powerful images require less words.

"Tempests" is the third story and is about Herr Soerensen and his acting troop. Malli Ross is preparing to play the part of Ariel in Shakespeare's "The Tempest," but a real shipwreck turns her into a true life heroine. She even refers to herself as the "resurrection and the life." I was very bewildered by most of this story

I am a happily married woman who knows all about the birds and the bees, but my reading life is so chaste that I struggled through the fourth tale in which a man and a woman are paid to sleep together. "The Immortal Story" reveals no unsavory details, but it was an effort to keep reading.

Fifth, and last, is "The Ring." I actually liked this story more than most of the others because its message was more pointed. A young, radiant bride discovers that marriage is not all happiness when she loses her wedding ring under strange circumstances.

Dinesen has been on my radar for years because Elisabeth Elliot mentions her in some of her books. Although "Babette's Feast" is one of my all-time favorite stories, I have to be honest and say that I did not enjoy the rest of the book. I kept hoping some of the hinted-at themes would make themselves clear. But, alas, that was not to be.

Every serious reader should be familiar with Dinesen's "Babette's Feast," so feel free to skip the other stories and enjoy her magnum opus.
Posted by hopeinbrazil at 6:55 PM 1 comment:

Another Quote on Deep Reading

From the Middle Ages until sometime after 1750, men read intensively. They had only a few books - the Bible, an almanac, a devotional work or two - and they read them over and over again, usually aloud and in groups, so that a narrow range of traditional literature became deeply impressed on their consciousness. By 1809 men were reading extensively. They read all kinds of material, especially periodicals and newspapers, and read it only once, and then raced on to the next item.

- from the Gutenberg Elegies by Sven Birkerts
Posted by hopeinbrazil at 5:32 AM 1 comment:

They say that Georgette Heyer is the queen of witty dialogue. If so, then D.E. Stevenson is the queen of friendly conversation. Even though Green Money is not my favorite Stevenson novel, I reveled in the affectionate, congenial, often blunt, banter of lifelong companions. It's my favorite kind of eavesdropping.

The time is 1939. George Ferrier is walking through the streets of London, imagining that all the life and beauty around him are in honor of his birthday.

Soon after this scene George falls headlong into an adventure which includes a crooked lawyer, a rich heiress, and the rescue of various damsels in distress. It is emphasized that George is not very brainy, but he more than makes up for with his great kindness and intuition into human character, (a little bit like John in the previously reviewed Rosemary Tree.)

This is not as cozy as the Miss Buncle or Mrs. Tim books because of light swearing and everybody smoking, but Stevenson's books are always beautifully written and chock-full of likeable, quirky characters. Take this passage about Mrs. Ferrier's car for example:

He turned into the main road and was off like a rocket. The old car seemed to respond to his urgency - it had never gone better - and for the first time in his life George felt there was something human and friendly about a car. It was not merely a mass of machinery and metal and wooden parts: it had a distinct personality and was actually responsive to his need. "Good old Granpa," whispered George. "You shall have the feed of our life if you get me there in time. I'll never laugh at you again. I'll polish your old brass nose till it shines like a beacon. I'll change your gear-box oil...." Encouraged by these promises, Granpa gave his best.... (p. 213)

This is a fun book that I would like to share. Just leave a comment about this giveaway on my Facebook page and a friend of mine who is heading to the States in a couple of weeks will mail it to you from there. Winner will be randomly chosen and will be announced in one week.

(Other Stevenson titles I've reviewed: Shoulder the Sky, Miss Buncle One, Two, and Three, Anna and Her Daughters.)
Posted by hopeinbrazil at 7:25 AM No comments: