Behind the Scenes by Elizabeth Keckley 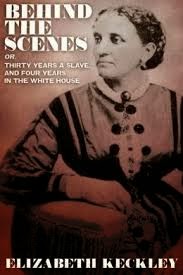 Behind the Scenes is a story told by the dressmaker and confidante of Abraham Lincoln´s wife, Mary Todd Lincoln. I´ve always heard that Mary was a little "tetched in the head", but this book shows her in a very different light. She was high strung maybe, but not crazy.

Before reading this book I had no idea how hugely unpopular Mary Todd Lincoln was as a first lady. She fought tooth and nail to protect her husband from those who took advantage of his child-like faith in them which brought her many political enemies. Her faithfulness to the Union was doubted because she had brothers fighting in the South. She was criticized for her expensive (and low-cut) gowns.

The book was written to counteract the rumors and lies in the press, but it is much more than the story of Mrs. Lincoln´s troubles. It´s the story of a courageous and talented African American woman who earned the respect and love of all who knew her. Elizabeth Keckley was born a slave yet through hard work and ingenuity she was able to buy her freedom and work her way up to working in the White House. There she befriended a very lonely and misunderstood president´s wife and wrote a book to set the record straight. Fascinating reading!
Posted by hopeinbrazil at 8:48 AM No comments:

Much Ado About Nothing by Shakespeare 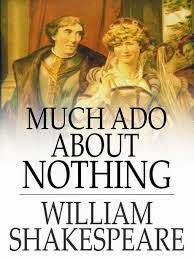 I read classics not because I "have to", but because I actually LIKE them. But when it comes to Shakespeare I have to admit intellectual laziness. I read some of his plays in high school and college. I´ve watched the movie versions and have seen at least 5 of his plays acted out on stage. But his works are NEVER on my list of books to read.

I can´t make the excuse that it is too complicated in reading plays to remember who´s who. One of my favorite books of all time is Cyrano de Bergerac  which is an extremely poignant and well-written play. And it´s not because Shakespeare does not appeal to me. For my 30th birthday my husband and I saw Kenneth Branagh´s Henry V at the theater and fell in love with it. My husband has watched it so many times that quotes from it are part of his daily vocabulary!

Laziness is my only excuse. Before my recent move I grabbed the thinnest book on my shelf and stuffed it into my purse for the trip. (Does anyone else feel underpacked unless they have at least 3 books to take along on a trip?) It happened to be Shakespeare´s Much Ado About Nothing . As I began reading I was captivated from page one by the rich language (Yes, I know Shakespeare and "rich language" have been synonymous for centuries!)

Leonoto describes his return from a battle with very few casualties with these words: "A victory is twice itself when the achiever brings home full numbers". Young, handsome Claudio is praised for his military prowess with these words: "He has borne himself beyond the promise of his age by doing in the figure of a lamb the feats of a lion."

The main love story of Claudio and Hero is overshadowed by the love story of minor characters Benedick and Beatrice. Their puns and verbal jabs are superb! My favorite line in the play is in Act 5, scene 2 when Beatrice is upset over her cousin´s problems and tells Benedick she feels ill. His response is, "Serve God, love me, and mend." What a prescription for what ails us!

I highly recommend this short play. My Wordsworth Classic edition came with a helpful glossary of archaic words.
Posted by hopeinbrazil at 7:07 AM 1 comment:

Would Jane Eyre Be Your Best Friend?

I´m typing from a library computer because we haven´t got internet hooked up at our new house yet. I miss blogging, but haven´t had much time for reading so I guess I´ll have much more to say by next week. I was pleased by this article mentioned at the Bronte Blog. I have often thought of Jane Eyre as a "friend", but would never have had the nerve to say it. When I was very young I even considered her my mentor. I liked the things Lesley had to say and if you´re a Jane Eyre fan, I think you´ll enjoy them too.
Posted by hopeinbrazil at 7:24 AM 2 comments: