Lunacy and Letters by G.K. Chesterton

I grasp only half of what G.K. Chesterton writes. But what I do understand is so astonishingly clear and profound (and witty) that I keep coming back for more. My latest foray into Chesterton has been Lunacy and Letters, a book of essays published posthumously by his secretary Dorothy Collins.

I loved the undercurrent of humor - such as the time he defended himself against the accusation of wife-beating by calling it "a pastime for which I lack the adequate energy." (p.134)

Chesterton is the king of paradox. He describes the man who wants to leave his boring city to find adventure and excitement. He contends that the opposite is true. The man is afraid of the unpredictability of real life. The reason we fly from the city is not in reality that it is not poetical; it is that its poetry is too fierce, too fascinating and too practical in its demands. (p. 23) In a later essay he writes, Let no one flatter himself that he leaves his family life in search of art, or knowledge; he leaves it because he is fleeing from the baffling knowledge of humanity and from the impossible art of life. (p. 60)

He writes of the sanctity of sleep; The greatest act of faith that a man can perform is the act that we perform every night. We abandon our identity, we turn our soul and body into chaos and old night. We uncreate ourselves as if at the end of the world; for all practical purposes we become as dead men, in the sure and certain hope of a glorious resurrection...It is in vain for us to say that we think the ultimate power [is] evil when every twelve hours we give our soul and body back to God without security. (i.e. guarantee) p. 30

Lunacy and Letters was recommended to me for the essay "Good Stories Spoiled by Great Authors" (in which Chesterton writes a scathing review of Milton's Adam from Paradise Lost). But the essay that I most loved was the last one called "The Roots of the World" which describes how "the enemies of religion cannot leave it alone." In their fruitless attempts to destroy it, however, they end up smashing everything else. (p. 191)

In Lunacy and Letters, G.K. is insightful, funny and hard-hitting. And worth the effort.

Although several of these essays were perplexing, the ones I understood were pure delight.

Anna and Her Daughters

Does anyone out there use the e-book lending services offered by Booklending.com, Lendle, or your local library? I use Booklending because it allows me to access books from Brazil and it's a great way to save money.  Sadly most of the available books on that site are steamy romances, but I've gotten a few books that were on my wish list. Now that several D.E. Stevenson books are in digital format, I hope to read them there, without buying them.

Recently, I "borrowed" Stevenson's Anna and Her Daughters. Like all of her books, it is a cozy read with just enough real life situations to keep it from being sappy. Anna's husband dies suddenly and she and her three teenage daughters are forced to move from their fashionable London apartment to a cottage in Scotland to adjust to their new financial circumstances. It is written from the youngest daughter's (Jane) perspective and recounts the joys and sorrows of the four women. I particularly enjoyed seeing how the mother comes alive as she returns to her provincial roots.

There is a bit of melodrama when all three girls fall for the same fellow, but it is resolved in the end (maybe too predictably). This is not my favorite Stevenson title since it is a bit choppy, but I always enjoy her lovely writing and her ability to create engaging characters.

Posted by hopeinbrazil at 2:29 PM 3 comments:

Sidney Chambers and the Shadow of Death by Runcie

I was reading a mystery with mediocre writing and mildly interesting characters, wondering if I should bother to finish it, when I received a notice from the library that this book had come in. The first paragraph of Shadow of Death, with its flawless prose and engaging hero, left no question in my mind as to which book was more worthy of my time.

Sidney Chambers is an Anglican priest who has a talent for getting mixed up in murders. The events take place in the 1950s and the author does a wonderful job of inserting appropriate historical details. The characters are well drawn and the story lines are nicely varied.

I agreed with WORLD magazine's review of this title as a cozy mystery - until the last hundred pages. The last two stories are about a lascivious man and then a man who is murdered for his sexual orientation. The former was gruesome and the latter was too politically correct to be enjoyable.

In spite of these defects, I relished this novel for its intelligent dialogue, its positive view of a Christian pastor, and its intriguing cast of characters.

I look forward to reading the sequels.

Warning: the BBC series based on the Sidney Chambers character is quite different. Each short story from the book is extended to one hour and things that are implicit in the book are explicit on the DVDs. Several sexual situations are added. Every episode ends with a ridiculously shallow sermon excusing whatever sin was highlighted in that particular episode.
Posted by hopeinbrazil at 12:00 AM No comments:

Shakespeare in One Year 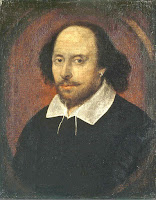 I agree with my friend, Carol, that the best way to do Shakespeare is to read each play in one sitting. I once set a goal to read just three a year, but I rarely remembered to stick to it. When I did remind myself, I was not always sure where to start. So I was delighted to see this article at First Things with a plan to read the entire Shakespearean canon in one year.

It is unlikely I'll be able to devote the half hour a day necessary to complete this challenge, BUT it is a lovely way to do Shakespeare in bite-sized chunks and to have a suggested order for reading. I'm going to give it a try.

Each individual play is available for free on Kindle, but I think I'll use The Complete Works of Shakespeare since it will put everything (plays and poetry) in one place.
Posted by hopeinbrazil at 1:12 PM 1 comment: