I just saw a notice that in celebration of Heyer's birthday her books are being offered for Kindle users: Every single title for $1.99 for one week.  Since I'm a newbie to Heyer I can't recommend the best ones, but if you read the comments on my previous post, you'll find quite a few suggestions.  Enjoy!

Update: This deal is no longer available, but there is one free title for Kindle as of today (7/31/14) called The Black Moth. It is interesting to me that Heyer's books are so expensive. There must be quite a demand for them. I see that with Amazon Unlimited (which I don't have), you can read many Heyer titles for free. Here are a few I saw that are only $2.99: Bath Tangle and April Lady. Unfortunately, the one I've heard the most rave reviews about Civil Contract is almost ten dollars.

(In case you are interested, The Black Moth has been put into audio form by Julie at Forgotten Classics.) 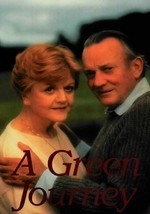 Earlier this year I raved about the book, A Green Journey.   Months later I was startled to discover that the book had been made into a film.  (I watched it via instant streaming on Netflix.)

Anyway, I liked the book a lot and felt sure the movie couldn’t match up.  It did and it didn’t.  First of all the film was surprisingly faithful to the book.  The actors did an excellent job of capturing the personalities of the book’s characters.  And, miracle of miracles, the faith of the protagonists was not watered down.

But, the romantic elements in the book (which I would never have classified as a romance novel) were exaggerated in the film.  However, the acting was better than your average “Hallmark” film so all was not lost.  Angela Lansbury is convincing as Agatha McGee and her co-star, Denholm Elliott is quite good, as well.

Do I need to add that you should read the book before watching the movie?  Without the background the book gives, the movie seems sketchy.  Telescoped events take a minute on film that take a whole chapter in the book.  The element I missed most was Agatha’s friend, Lillian, who is a very funny part of the book, but only a small player in the movie.

This made-for-TV movie was originally called “The Love She Sought”.  Lansbury also brought two other books to film that you might enjoy: Mrs. ‘Arris Goes to Paris and The Unexpected Mrs. Pollifax. (The first is available on VHS only, and the second one I watched on TV.)
Posted by hopeinbrazil at 8:29 AM 2 comments: 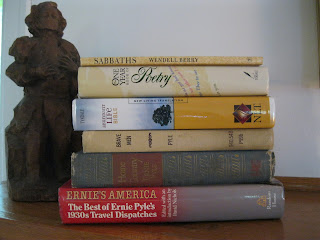 I can still hardly believe the lovely books I'm able to get through PaperBackSwap.

Berry's titles take a long time to receive, but they are worth the wait.  I acquired the Ernie Pyle titles without being on any waiting list at all.   My favorite poetry book got lost in our last international move so I was thrilled to find it available at PBS in "like new" condition.  Almost all of these are hardbacks in great condition so I'm pleased to add them to my library.
Posted by hopeinbrazil at 7:57 AM 1 comment: