The Story Girl by L.M. Montgomery

I confess, I was halfway through The Story Girl before it really grabbed me. At first I thought it was because I had a hard time connecting with childish ways of thinking and talking, but that doesn't make sense since I loved Betsy-Tacy. Then I thought it might be for lack of plot. The book follows half a dozen children through their summer activities and is interwoven with the tales told by the enchanting Sara Stanley. Cousin, Beverly King, and his brother Felix are visiting for the summer and Bev is the narrator/onlooker of interactions between siblings Felicity, Cecily and Daniel, as well as the hired boy Peter, and two neighbor girls, Sara Ray and, of course "the Story Girl."

The more I read it, the more I grew attached to the characters. I appreciated their very honest, child-like opinions and their questions about faith and prayer. This was not the tacked-on religiosity of most Christian novels. These children were brought up in a time when respectable families attended church, and when the adults around them discussed these things. It was very natural for them to parrot the  grown-ups while at the same time pondering the truths behind their words and practices. Delightful biblical allusions are sprinkled throughout such as when one of the aunts "brings tidings of great joy" at Peter's recovery from illness and Beverly responds by saying they had been "given beauty for ashes."

Although fourteen-year old Felicity is the clear favorite with the boys for her beauty and her cooking ability, the (much plainer) Story Girl captivates them with her charm. I cannot describe [her voice.] wrote Beverly. If voices had colors, hers would have been like a rainbow. It made words live.

Which brings me to another highlight of the book - its lovely writing.

Haylofts are delicious places, with just enough shadow and soft, uncertain noises to give an agreeable tang of mystery.

The rain was weeping on the roof as if it were shedding the tears of old sorrows.

The Story Girl sighed again. She loved expressive words, and treasured them as some girls might have treasured jewels. To her, they were as lustrous pearls, threaded on the crimson cord of a vivid fancy.

And I can't fail to mention the gentle humor: I don't suppose your Aunt Jane knew all the rules of etiquette, said Felicity, designing to crush Peter with a big word. But Peter was not to be so crushed. He had in him a certain toughness of fiber, that would have been proof against a whole dictionary.

This was a thoroughly delightful book and I look forward to plunging into its sequel, The Golden Road. (Both the books I've linked to are free for Kindle.)

Christian movies tend to be as hokey as Christian novels, so I never thought I'd be recommending one of them here. But last weekend we watched Miracles from Heaven with Jennifer Garner and Martin Henderson and I have to admit it is better than most films in the genre.

Christy and Kevin Beam and their three daughters are a traditional church-going family. Suddenly ten-year old Anna is diagnosed with a disease requiring complex medicines and frequent doctor's visits. The family's faith is put to the test as they learn that there is more than one kind of miracle.

The acting is terrific. Jennifer Garner (Christy Beam) and Kylie Rogers (her sick daughter, Anna) are superb in their roles. The movie shows Christians in a realistic light. Some with deep faith, some with little faith, and some who are just nasty.

The humor is not dorky, unless you count the doctor who acts silly to make his patients laugh. (I thought he was wonderful.) Many Christian films tend to shy away from using the name of Jesus, and this one is no exception. There was lots of talk of the importance of faith, though. And one of the characters wears a cross necklace which is one of the plot points.

I loved the ending of the film followed by the extra clips of the actual Beam family. A heart-warming worthwhile film.

Posted by hopeinbrazil at 6:33 AM No comments:

Simplify Your Life by Marcia Ramsland 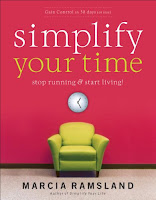 As we grow older, we (hopefully) grow wiser. One of my favorite post-parenting lessons has been to learn to cut back on the busy activities that drain me and to increase the tasks and ministries that bring me joy. That's why I appreciated both of Marcia Ramsland's books Simplify Your Life and Simplify Your Time.

In Simplify Your Life, Ramsland encourages list makers (like me) to live horizontally rather than vertically. A vertical person looks at a long "to do" list from top to bottom and becomes overwhelmed. A horizontal person looks at a calendar ("the big picture") and sees where active days have to followed up with lighter ones. I started doing this even before reading about it in her book. Programming quiet and alone time after days of heavy social interaction has been revolutionary for me.

An overcommitted calendar is the quickest way to drain all the enthusiasm and momentum from your life, as well as the lives of your spouse and children. (p. 23)

She gives many suggestions for time management, but for me her best tip is to plan something into every day that gives you a deep sense of satisfaction. This would be different for everyone, but some of the things that I do are: Bible journaling, killer sudoku puzzles, read a good book, or bake bread. Or drink a cup of tea in a beautiful tea cup.

The second book, Simplify Your Time, centers more on reaching your goals. Denise Waitley says, "A goal is a dream with a date attached." Without attention to your personal goals, you will never find the time to do the things you really want to do. This is another practice that I've begun in the last few years that has made a big difference. With personal deadlines written into my calendar, an overwhelming project became do-able. And dreams that are always on the back burner start to happen.

None of this is rocket science, but every year I read at least one book on time management to make sure that I'm on track. Both of these books were helpful.
Posted by hopeinbrazil at 6:05 AM No comments:

Annie is a world-traveller who loses her job and has to move back to a small town in Kentucky to live with her grandmother. She meets up with an old friend and their relationship quickly turns into something more. While renovating an old house, old letters are found beneath the floor boards. Guarded is the story of secrets and hidden fears that come to the forefront.

Frankly, my expectations were low because most Christian fiction is hard to swallow. But Correll's book was a nice surprise. Unlike most Christian novels, the writing was good, with nary an awkward sentence to make my scratch my head and wonder where her editors were.

People have Bibles, go to church, and pray, but faith is never forced or awkward. There is romance, but it isn't the only focus of the story. The lost/found letters lead to an adventure for Annie and her grandmother that brings healing to old hurts, which makes this light read very satisfying.

The story was engaging and the characters likable. I have to admit at floundering a few times with knowing who was who. It might have been helpful to have read the first book, Grounded, but it was not essential.

This is a nice deal: 99 cents on Kindle.