Books I Read in October

This was another month of so-so reading. I'm longing for a really good book that I can get lost in without, at the same time, having to say good-bye to my brains. (I hear Jane Austen calling me...) From worst to best here's the list:

Where Wildflowers Bloom by Shorey (reviewed here)
A Matter of Honor by Herries (only read half, my thoughts)
Refuge on Crescent Hill by Dobson (reviewed here)

I thought I'd given up reading books about books since my TBR list is so long I'll need two lifetimes to complete it. And my tastes have matured enough that I no longer feel I have to read everything the "experts" tell me to read. But when this book lover's guide became available through PaperBackSwap, I couldn't resist. Glaspey shares my desire to be well-read and to be able to discern the important messages in both Christian and secular books.

There is nothing wrong with reading for entertainment. That is certainly one of its valid functions, and a noble one at that, because many of the very greatest books are extremely entertaining. But people who read only for entertainment are robbing themselves of one of the true pleasures of reading: that of expanding the mind, the heart, the soul, and the spirit. When we stop learning, we stop growing. (p. 198)

He begins the book with a list of Christian classics that everyone should read (Paradise Lost, Pilgrim's Progress, Augustine's Confessions, etc.) , and follows that with several chapters on secular books with "big ideas" that are important for Christians to read and evaluate. (John Locke, Machiavelli, and Voltaire are just a few suggested authors.) Glaspey calls the gaining of insights from godless men "plundering the Egyptians" (from Exodus 3:22) and challenges his readers to be unafraid to dialogue with these thinkers.

I found his suggestions of specific translations of several classics to be very helpful. He recommends John Ciardi's annotated translation of Dante's Divine Comedy and Peter Kreeft's condensed version of Aquinas' Summa Theologica, for example.

If you are a regular reader of this blog you will resonate with this guide to non-fluffy literature. Glaspey convinced me to try a few of the Greek classics, and he also encouraged me to try a few books I had ignored in the past as "not for me." I'll be reviewing them in the months to come.

Posted by hopeinbrazil at 2:00 AM 5 comments: 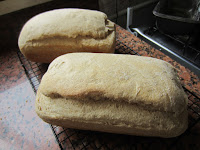 There’s nothing like a fresh page of a new book, a first date, or a patch of turned-over earth in the garden. All the possibilities! – from Small Kindnesses by Satya Robyn

No yoga exercise, no meditation in a chapel filled with music will rid you of your blues better than the humble task of making your own bread. - from M.F.K. Fisher's The Art of Eating

Everything that slows us down and forces patience, everything that sets us back into the slow circles of nature, is a help. Gardening is an instrument of grace. - May Sarton

Households that have lost the soul of cooking from their routines may not know what they are missing: the song of a stir-fry sizzle, the small talk of clinking measuring spoons, the yeasty scent of rising dough, the painting of flavors onto a pizza before it slides into the oven. - Barbara Kingsolver.

Posted by hopeinbrazil at 2:30 AM 2 comments:

Mission at Nuremberg by Tim Townsend

Can thoroughly evil men be redeemed? That was the key question for the administrators and lawyers connected with the trials of Nazi war criminals after WWII. Did they deserve spiritual help? Would they even want it?

Some wanted to exterminate them without a trial since their guilt was so obvious. But others felt a trial was important because it distinguished between revenge and punishment. Gordon Dean (press spokesperson for the chief prosecutor at the Nuremberg Trials) wrote, "The concept that guilt should be fairly ascertained is so embedded in the charters of civilized countries that we cannot afford to abandon it here simply because the guilt is great."

Based on the religious rights clause of the Geneva Convention, Henry Gerecke, a Lutheran pastor from St. Louis, was called to minister to the Germans on death row. He felt that God was the ultimate Judge and that the earthly guilt of his "congregation" was of no significance as far as he was concerned. His only duty was the care of souls. He asked God to preserve him from any prejudice against those who spiritual care had been committed to his charge.  Some wondered how he could comfort these Nazis who had caused the world so much heartache? How could he minister to the leaders of a movement that had taken millions of lives? He was even criticized for shaking their hands on their first encounter. But he was operating on the principle, "If your enemies are hungry, give them bread to eat; and if they are thirsty, give them water."

What follows is a fascinating story of 22 men during their last weeks on earth. Thirteen of them attended Gerecke's daily services. Four attended Catholic mass and five refused all spiritual counsel. Some repented and some went to their deaths declaring themselves innocent of all wrong-doing.

Although the facts behind this book were gripping, the prose was often lacking.  (I have found this to be true with most WWII non-fiction.) Because the recorded spiritual conversations between Gerecke and the prisoners fill only about 6 percent of the book's 300 pages, Townsend had to put in A LOT of filler. He gives 150 pages of background (including the grades the chaplains got in college) before Gerecke actually meets his prison congregants. In Chapter 9 he meanders through his odd understanding of the Old Testament. In another chapter he writes extensively about the Lord's Supper.

Still, I'm glad I gave this book a chance. I was impressed that these men were given a fair trial in spite of the overwhelming proof of their guilt. I was touched by Gerecke's life and that he took the eternal destiny of these men seriously enough to dedicate himself to their care. Most of all I was amazed at the miracle that God did in the hearts of some of the men.

P.S. Exceptions to dry WWII non-fiction are Lauren Hillenbrand's Unbroken, Robert Edsel's The Monuments Men, Robert Leckie's Helmet for My Pillow, and anything by Ernie Pyle.)

Posted by hopeinbrazil at 2:00 AM 3 comments: