In my reading this week I came across this quote. It was tucked away in an article from the latest edition of Books and Culture (Mar/April 2009). This prayer took me by surprise with its heartfelt simplicity: 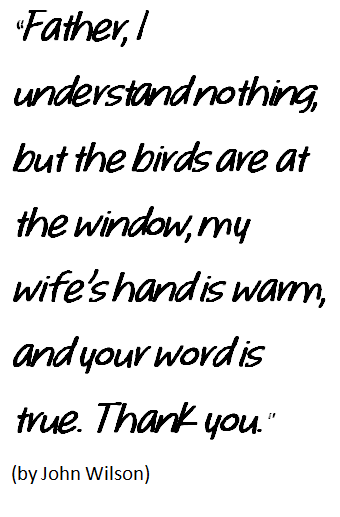 Posted by hopeinbrazil at 4:42 PM No comments:

The Passion of Jesus Christ by John Piper

I do not come from a church tradition that requires giving up something for Lent. But I liked the suggestion from several book bloggers that I could prepare my heart for Easter another way - by reading books specifically about Christ’s life and death. The title of Piper’s book, The Passion of Jesus Christ , seemed to fit the bill, especially with its intriguing subtitle: “Fifty Reasons Why He Came to Die”.

Each of the fifty brief chapters is simply written and based on a specific scripture verse which Piper goes on to explain. Chapter 8, for example, is on Mark 10:45 (“The Son of Man came not to be served but to serve, and to give his life as a ransom for many.”) The next two pages describe what it means to be ransomed. Sound boring? It isn’t. Because of the brevity of each section you don’t get bogged down in deep theological treatises. Instead you get a quick overview of the amazing gift of salvation that we have received through Jesus Christ. Most of us can name the obvious reasons He came to die: that we might be saved from sin, from God’s wrath and from hell. But could we name FIFTY?

The Passion gives a broader picture of salvation. We are not just saved FROM certain things, but are saved FOR others (deeper marriages – #35, good works – #36, to destroy hostility between races – #44, etc.) Although it is written in laymen’s terms for easy understanding, it contains many profound thoughts as well; I look forward to re-visiting the book during future Lenten seasons. 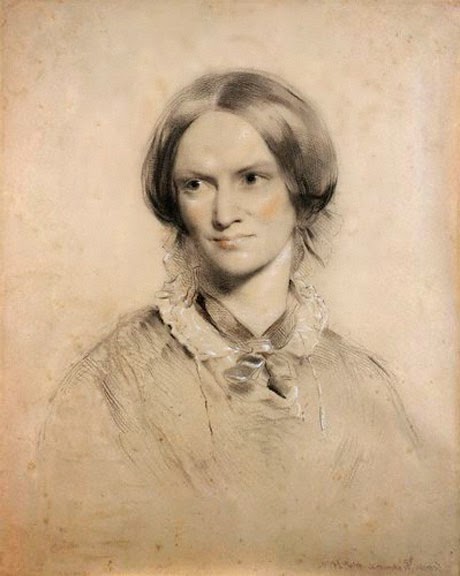 In honor of Charlotte Brontë’s birthday I thought I’d quote one of my favorite passages from Jane Eyre - when Jane's trying her best not to fall in love with Mr. Rochester:

No sooner did I see that his attention was riveted on [the other guests], and that I might gaze without being observed, than my eyes were drawn involuntarily to his face: I could not keep their lids under control: they would rise and the irids would fix on him. I looked, and had an acute pleasure in looking, - a precious, yet poignant pleasure; pure gold, with a steely point of agony; a pleasure like what the thirst-perishing man might feel who knows the well to which he has crept is poisoned, yet stoops and drinks divine draughts nevertheless. (from chapter 17)

This is a lovely book which I have revisited many times in the last 30 years.
Posted by hopeinbrazil at 5:10 PM 4 comments:

The Big Sleep by Raymond Chandler

I read recently that all the world can be divided between Raymond Chandler and Dashiell Hammett fans. Considering that most of the present world has never heard of these two writers of detective fiction, I’m wondering how that could be true. I’m still undecided as to which one I like better. Jim Widner over at Radio Detective Story Hour intrigued me by describing Chandler’s creation, Phillipe Marlowe, as more cerebral and sensitive than other popular detectives of the 1940’s. So I was delighted when I found a brand new copy of The Big Sleep at our library.

I should have taken Mandi's word for it when she doubted this book’s status as "literature", but I thought I’d have an insider’s understanding of the book since I’m a big fan of the old time radio podcasts which feature Marlowe. Well, I was wrong. As I read, I kept wondering, “Why is a nice girl like me reading a book like this?” Though the sins depicted in the book are not as graphic as those described in contemporary fiction, there are references to homosexuality, drinking, profanity and nudity. It seemed more than a little ironic that the hard-drinking P.I. abhorred pornography and was able to resist the charms of all the women who threw themselves at him.

Chandler is considered to be one of the fathers of “hard-boiled” detective novels and he certainly knows how to weave a good story, but for now I’ll stick to the family friendly radio shows. One totally off-the-wall comment I’d like to make about the book concerns its lovely binding. The book, Raymond Chandler: Stories and Early Novels: Pulp Stories , is part of the Library of America series and is beautifully bound with a ribbon book marker - a joy to hold while reading!
Posted by hopeinbrazil at 7:14 PM 2 comments:

From the title, El Dorado, you would never know this is the sequel to one of my favorite books, The Scarlet Pimpernel. I was clued in by Glen at Free Listens (who sadly seems to have stopped blogging). If it is possible for the reader of the book to be better than the book itself, then that is the case for this particular audiobook. Karen Savage has a solid voice, good inflection AND pronounces the French words beautifully. The opening chapters were slow and monotonous (Savage bemoans this on her own blog), but her lovely voice kept me going.

The first half of the book is about Armand, brother-in-law and fellow conspirator to Percy Blakeney (a.k.a. the Scarlet Pimpernel). He makes some foolish choices that jeopardize the Pimpernel’s plans to free the heir to the French throne from prison. Blakeney steps in to save the day and when he makes his appearance, the story finally becomes as engaging as the original book.

This is not primarily a romance, but I loved how Sir Percy referred to his wife, Marguerite, as “dear heart”. I appreciated her complete willingness to trust him and to die for him, if need be.

There was plenty of Christian imagery in this book, which I didn’t recall from the first one. Blakeney is compared to a savior and after his imprisonment is described as one “on his way to Calvary”. When Armand fouls up the plans, he calls himself “Judas” and feels the only way to redeem himself is to give his life for Percy. Fascinating vocabulary. The writing, too, was exceptional at times. The image of the young dauphin being forced to trample and spit on the flag of France was vivid and heart-rending.

I enjoyed this book very much, but don’t know if I would have gotten through the clumsy beginning if it hadn’t been for the excellent narration by Ms. Savage. Kudos to her for doing such a great job! Here’s the link if you’d like to download it from Librivox.
Posted by hopeinbrazil at 1:45 PM 3 comments:

I’m glad I took this challenge. It was humbling because there were several books I started and could not finish, but it was heartening that the other books I tried were not only readable, but highly relevant to modern day questions. (This is the main point of Adler’s How to Read a Book.)


Aesop's Fables was the easiest and most enjoyable read with its timeless moral tales. Reviewed here.

Plato’s Apology was surprisingly simple in its writing style, yet profound in its comments on death and honor. “Virtue” (long-forgotten, yet lovely word) was used quite frequently in the text. How many of us can say as he did, “The difficulty, my friends, is not to avoid death, but to avoid unrighteousness.”?

He goes on to say that it is pretence to be afraid of death. “Death may be the greatest good.” That phrase struck me hard since I’d just read the same idea in George MacDonald’s “The Golden Key” (Now that you have tasted death, said the Old Man, is it good? It is good, said Mossy. It is better than life. No, said the Old Man: it is only more life. p. 42)

Alcestis by Eurpides was a play I read through DailyReader.net. It is written in simple, beautiful poetry and provided many a morsel of “brain food”. I should say “heart” food because the themes were love, loyalty and self-sacrifice. In this story Alcestis gives up her life to save her husband’s and he remains loyal to her even after her death; when another woman is brought to him, he says, “How could I lay this woman where my bride once lay? It were dishonour double-dyed.” I love language like that.

Tanglewood Tales by Nathaniel Hawthorne was a retelling of Greek myths. Review here.

The Art of War by Sun Tzu was, well, boring. But now that I’m reading a book about strategies in WWII, some of them are sounding familiar. The occasional Confucius-like sayings were the only thing that kept me reading:
1) To hear the noise of thunder is no sign of a quick ear.
2) Let your rapidity be that of the wind, your compactness that of the forest.
3) Let your plans be dark and impenetrable as night, and when you move, fall like a thunderbolt.

I’m glad to be officially done with the challenge. I have two other books from the pre-Shakespeare time period that I’d like to try this year, but I’ll write about them later.
Posted by hopeinbrazil at 6:59 PM 2 comments: