Honey for a Teen's Heart by Gladys Hunt 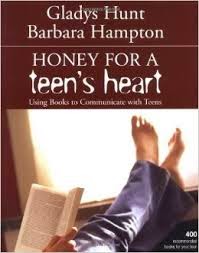 Why would I read about books recommended for teens when my teens are grown? Why would I add almost a hundred titles to my already overwhelming list of "books to read someday"? Because I'm nuts. Nuts about books, that is. And I'm fond of Gladys Hunt whose Honey for a Child's Heart led us to many happy hours of family read-alouds.  AND because a really good YA book can be read and enjoyed by an adult. (Two of my very favorite books are The Giver and Tuck Everlasting.)

I also like books that make me think. The subtitle of Honey for a Teen's Heart is: "Using Books to Communicate with Teens" and Hunt offers hundreds of suggestions for family read-alouds that will open up the floor for discussion of crucial subjects. Some of her choices are more gritty than I like, but probably necessary because of the sordid world we live in. Each recommendation is followed by several paragraphs of explanation about its theme or its author's world view. Very helpful!

The book is divided into sections by genre/subject. (Mostly fiction titles since stories offer wonderful fodder for discussion.) A small percentage of the books fall into the "twaddle" category, but every parent has to make book choices based on their child's interests and reading level. There are dozens of tried and true classics listed, but many more modern and new (to me) books.

Since I abhor most of the rubbish that has been written for children in the last 60 years, I'm thankful for someone like Gladys Hunt who has sifted through the chaff and brought out the wheat. I can hardly get wait to get back to the U.S. to look up some of these titles. (two months from now!)

I look forward to sharing my thoughts about these books in the near future.

Note: There is a small issue with the Kindle formatting which sometimes puts information from the sidebar into the middle of the text.

The reasons I dislike vintage novels (preachy and sentimental) are the same reasons I'm drawn to them (morally uplifting and undemanding).

Grace S. Richmond is an author from that era who intrigues me because my grandparents used to read her books together when they were courting in 1917. Anyway, her book, The Brown Study, was a pleasant surprise in light reading. It had a nice twist on the common plot of "poor-girl-meets-rich-boy-and-they-live happily-ever-after."

Donald Brown is the young pastor of the huge wealthy congregation of St. Timothy's. After some soul-searching, he decides that he's wasting his life serving such superficial folks, and he makes the experiment of moving into a poor neighborhood to see if he can make a difference there. His friends think he's a lunatic and the gist of the book is how they all come to understand one another. (There's a little romance too.) The title is a pun on the old-fashioned expression "Brown Study," which means to think deeply about something.

Two other novels that deal with this theme are Harold Bell Wright's A Higher Call and Elizabeth Goudge's Gentian Hill. In these books the pastor is forced to decide if he'll leave a comfortable ministry for a demanding one. (This is also the message of Jen Hatmaker's Interrupted, which I'm reading right now so this subject is really resonating with me.)

There is a chapter that could not have been written today about how Brown borrows the neighbor's baby to cuddle in his loneliness. Modern readers would only see sexual implications in that.

This title is free for Kindle (My version was followed by a romantic short story "The Time of His Life" that you can take or leave.)
Posted by hopeinbrazil at 5:15 AM 5 comments: 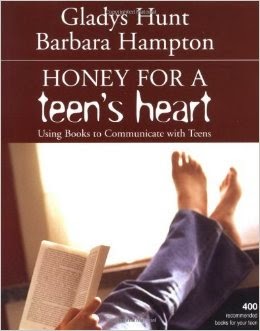 Sometimes I like to pretend my TBR list isn't already a thousand books too long and I pick up a book about books (with a zillion more recommendations). That happened again last night when I saw these Kindle deals at Amazon:

Honey for a Woman's Heart: Growing Your World through Reading Great Books - 99 cents

Honey for a Teen's Heart: Using Books to Communicate with Teens - 99 cents

The Christian Tradition in English Literature - 99 cents (I bought this one a few weeks ago, but since it's still on sale, I decided to add it to the list.)

Posted by hopeinbrazil at 4:44 AM 3 comments:

The Best Yes by Lysa TerKeurst

Books about priorities are a dime a dozen these days, and that's a good thing because there's always one to grab when my schedule starts sapping the life out of me.

Lisa TerKeurst clearly outlines the dangers of an over-committed schedule in her book The Best Yes. She writes appealingly of how our filled-up calendars make for empty souls. And she makes a good case for saying "no" to peripherals so that we can say "yes" to the specific tasks we know that God has called us to do. She skillfully leads her readers through various scripture passages and reminds them that the best "yes" of all is to rest in Jesus.

I resonated with so much of the book that I know I'll be re-reading it in the near future, but I have just one caveat. Although I loved the content of the book, I did not always enjoy its tone. It is clear from the truths and experiences shared by TerKeurst that she is not a shallow woman. Yet the illustrations in the book are often frivolous or in bad taste.

How many times do I want to hear that she almost wet her pants at her daughter's track meet? This would work as a funny story from a podium at a ladies' conference, but book writing demands more thought and word precision. Can you imagine Edith Schaeffer sharing such a thing in one of her books? Did TerKeurst's editors make her write this fluff so she'd appeal to the average American woman? And what does that impy about their opinion of us?

Anyway, if you are a chronic people pleaser (like me) who finds herself dog-paddling furiously to stay above water most days, The Best Yes is like a rope being thrown out to pull you into shore.

Posted by hopeinbrazil at 3:46 PM 5 comments:

It's been a long time since I've swallowed a book in one gulp, but after finishing a huge project last week, I did just that.

The Two Mrs. Abbotts  is the third book in the Miss Buncle Series. It re-visits several favorite characters and presents a few new ones. Jerry Abbott, who was introduced in Book Two is the main character and Barbara Buncle (from Book One) pops in occasionally.

The story takes place in 1942. Jerry's husband, Sam, is off to war and she and her friends are doing the best they can with the food shortages and child evacuees from London. There are no big adventures, just normal people coping and helping one another, which makes it a cozy book.

Though Stevenson is listed at Wikipedia as an author of romantic novels, that's not entirely true. She wrote books that were realistic with a little romance thrown in. In fact, one of the fun themes of this book is the silliness of romance novels.

Though not a Christian book, The Two Mrs. Abbotts has lovely biblical allusions that show that Stevenson was probably brought up listening to the Bible. Some of these were quite funny like when the military move into their house and Jerry and Markie are limited to the sitting rooom where "they live and move and have their being."

Good writing, biblical allusions, references to life on the homefront during WWII, and memorable characters make this another favorite of 2015.

Reviews of the previous books are here and here.