Renew My Heart by John Wesley 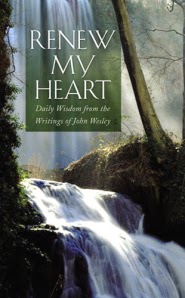 Years ago when I substituted romantic novels with meatier fare I put myself out of the circle of the majority of readers. My love for the sermons of John Wesley has put me in an even more remote category of reader! This week I’ve had the joy of editing ten of his sermons (from English to Portuguese) and it’s been an exhilarating, exhausting experience. I had two reasons for doing this: I teach about Wesley at our seminary and all of his works are out of print. And I’ve been getting such a kick out of my daily readings in Renew My Heart (a compilation of miscellaneous paragraphs from Wesley’s most famous writings) that I thought it was a shame no one else in Brazil had access to them. John Wesley's Sermons are available in very archaic Portuguese on the internet. Little did I know that when I downloaded them to do a bit of “tweaking” that I would be spending two months making painstaking corrections on each one. Even my husband who grew up in Brazil did not know many of the old words that were used.

It has required reading the Portuguese versions, the English versions (to compare and confirm word choices), my English and Brazilian dictionaries (to figure out what these guys were really trying to say!), my Portuguese Bible and our giant concordance (to update the phrasing of Bible verses). All that cross-checking has taken weeks out of my life! My goal was to make a more readable version of the texts that I could share with anyone who might be interested. But it met another goal of mine which is to read one book in Portuguese for every four I read in English. After 20 years in Brazil I figure it’s about time! I guess it was a good sign that I was just as inspired reading the Portuguese as I am when I’m reading the English. John Wesley’s sermons still preach.
Posted by hopeinbrazil at 2:35 PM