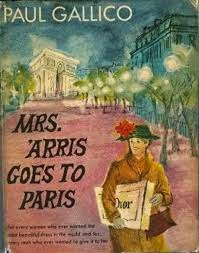 One of the reasons I do not join book challenges is because I don’t like anyone to tell me who/what to read. I admit it. I am prejudiced against certain authors because my first and only contact with them has been negative. Like Mr. Darcy, “my good opinion, once lost is lost forever”. Occasionally, though, I find an author who redeems himself in a second novel. And I’m glad to admit I was wrong.

After the dismal ending of Gallico’s acclaimed Snow Goose, I had sworn him off forever. But when I saw his Mrs. 'Arris Goes to Paris at our school library I just couldn’t resist. It’s the story of Ada Harris, a London charwoman, making the best of her widowhood by cleaning other people’s apartments. One day she opens the closet of one of her wealthy clients and sees a Dior dress hanging there. Suddenly, beyond all reason, she knows she must have one of her very own.

Her efforts to make her dream come true are only the beginning of this charming story. It could almost be categorized as a “grown-up” fairy tale because wherever she goes Mrs. Harris seems to sprinkle fairy dust over those she meets. YET she’s very realistically drawn (missing teeth and all!) and the book is fraught with painful setbacks.

As I read the book I wondered if it would have been ignored by today’s publishers. After all its emphasis on feminine longings (to own a Dior creation) or to be married instead of have a career (a dilemma of one of the book’s characters) just doesn’t fit into a culture dominated by feminism. But I appreciated Gallico’s handling of these themes. He had a gift for making me care very much about the people in the book. I inwardly shouted “Bravo!” as they each took steps forward to help others and became better for it themselves.

In the end Mrs. Harris’ yearning for the dress is secondary. The friendships that are made because of her quest are what change her life forever. This book was a delight from start to finish.
Posted by hopeinbrazil at 8:44 AM

Sarah at Library Hospital reviewed that book recently and I can't wait to get my hands on it! I'm glad to know you enjoyed it also and I thought the points you raised were interesting. A lot of older books woudl be quickly dismissed by a modern audience but that doesn't always mean it should be so. Usuaully I'm MORE drawn to a book if the modern audience would talk it down. Some of your stubborness exists in me too (in a different form)! ;)

Thanks for your review!

Thanks for stopping by my blog and commenting on Devotions for Sacred Parenting. Parenting IS hard, isn't it? I haven't read any of Thomas's other books, but I am eager to do that now. Sometimes I have a difficult time reading nonfiction, but not so this book! I hope you get as much from it as I did. Thanks again!

I think this book is absolutely charming. I read it a few months ago and loved it.

I loved this book too, and was surprised that it was written by the same author as The Poseidon Adventure. I went ahead and bout three more in the Mrs. 'Arris series since none of my libraries have any of the books. I'll be posting reviews in 2009, if you are curious.

Ooh, have you seen the film with Angela Lansbury? Lovely.

I watched the Angela Lansbury years ago, and I really liked it. I'll have to find this book.
I bet you would also like "Miss Pettigrew Lives for a Day." It has some parallels, and is a great read.

I've watched that movie (with Angela Lansbury) a few times and love it! I've wanted to locate the book, but it isn't available new. I'm going to have to search a little harder because I would love to read it. Thanks for the review!