Aesop's Fables - Not Just for Kids! 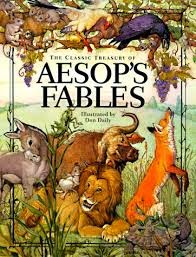 Most of us have been exposed to Aesop through children’s books where half a dozen of his most famous fables are retold. We are familiar with “The Boy Who Cried Wolf”, “The Tortoise and the Hare”, and “The Fox and the Sour Grapes”. But have you ever heard the one about “The Bald Man and the Fly”? Or “The Frogs Who Wanted a King”?

Recently in a fit of insanity I went against all my resolves and joined a book challenge. One of the reasons I read is to become a better thinker so the Really Old Classics Challenge seemed like a pretty good place to find fodder for my little gray cells. While scrolling through the titles of books written before 1600 I immediately pounced on Aesop's Fables as the book I was most likely to understand without footnotes. A quick search for internet sources revealed Daily.Reader.net, a site that sends daily installments of your chosen book straight to your inbox. Though not the ideal method for reading a full-length novel, I thought it splendid for reading a book of short stories, and signed up to receive Aesop.

The short, well-written stories were a delight. I glowed with appreciation over familiar tales, and laughed out loud at some that were new to me. Several of the newer fables were amazingly profound. It took me a week to get through all eighty-two and I enjoyed every one of them. Many reminded me of a Bible verse or biblical principle.

“The Town Mouse and Country Mouse” (story #7) has the moral: "Better beans and bacon in peace than cakes and ale in fear” which sounds a lot like Proverbs 15:17: “Better a meal of vegetables where there is love than a fattened calf with hatred”. The moral of Story #12 was, “Destroy the seed of evil, or it will grow up to your ruin.” Story #44 stated you should “Train up a child in the way he should go; and when he is old he will not depart therefrom.” (which is almost word for word the same as the Bible verse – possibly due to the translator?) The moral of story #54 is that vices are their own punishment. And the story of the Fox and the Mask (#20) teaches “Outward show is a poor substitute for inner worth.” All in all it was a delightful, nourishing, easy read and it deserves its place in the “worthwhile books” category.

A sample from the book:

THE MAN AND THE SATYR
A Man had lost his way in a wood one bitter winter's night. As he was roaming about, a Satyr came up to him, and finding that he had lost his way, promised to give him a lodging for the night, and guide him out of the forest in the morning. As he went along to the Satyr's cell, the Man raised both his hands to his mouth and kept on blowing at them. "What do you do that for?" said the Satyr.
"My hands are numb with the cold," said the Man, "and my breath warms them."
After this they arrived at the Satyr's home, and soon the Satyr put a smoking dish of porridge before him. But when the Man raised his spoon to his mouth he began blowing upon it. "And what do you do that for?" said the Satyr.
"The porridge is too hot, and my breath will cool it."
"Out you go," said the Satyr. "I will have nought to do with a man who can blow hot and cold with the same breath."
Posted by hopeinbrazil at 4:04 AM

I also enjoyed reading Aesop's Fables last year and felt they were very relevant and fun! I was reading in a children's literature textbook, though, that they are very different depending on the "translator." They were originally written in the pre-Christian era, but over the years, of course, the "translators" rewrote them to teach the principles they found most imperative for children. Very interesting to me!

BTW, I read The Age of Innocence via daily reader.net. I enjoyed it, although yes, I admit there were days I read two readings because it ended in the middle of the chapter....

Hope. There is too much book-talk to put in one measly comment!!

Fables. I learned this from my beloved Latin teacher. The word fable comes from fabula (to speak) and, by definition, has animals that speak. The talking animals distinguish a fable from a fairy tale or a myth or legend. I never knew that until he told us.

I've had friends urge me towards Daily.Reader.net but I've been a bit gun-shy at reading on the screen.

Might I recommend a book for your Really Old Classics Challenge? Beowulf translated by Seamus Heaney. I loved the translation and have very warm memories of reading it to my 5th grader (at the time). We've since listened to it read by the author and loved it. Beowulf was written during a transition time and mixes paganism with Biblical beliefs. (I don't love the syncretism, just putting that in to help understand).