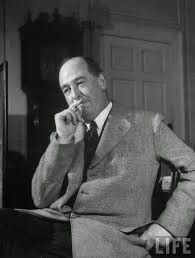 What makes an ordinary book different from a classic? Here is one reason given by C.S. Lewis:

In the first place, the majority [of readers] never read anything twice. The sure mark of an unliterary man is that he considers "I've already read it" to be a conclusive argument against reading a work. We have all known women who remembered a novel so dimly that they had to stand for half an hour in the library skimming through it before they were certain they had once read it. But the moment they became certain, they rejected it immediately. It was for them dead, like a burnt-out match, an old railway ticket, or yesterday's paper; they had already used it. Those who read great works, on the other hand, will read the same work ten, twenty or thirty times during the course of their life. (p. 2 from An Experiment in Criticism)

The only books I have read multiple times (more than three) are Jane Eyre, the Bible and Pilgrim's Progress, Persuasion and The Warden. What about you? What are you favorite re-reads?
Posted by hopeinbrazil at 1:31 PM

The Bible and Anne of Green Gables (all 8 in the series). I've read Jane Eyre only twice, but it will definitely be a reread!