The Wooden Horse by Eric Williams 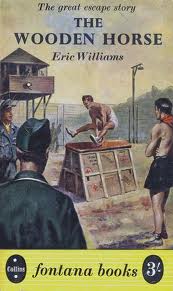 As I started to read this WWII escape story, it seemed too vivid to be “made up”. A little research revealed that The Wooden Horse was, indeed, a novelized version of true events. Eric Williams was an Englishman in the Royal Air Force when he was shot down over Germany at the beginning of the war. The wooden horse in the title refers to a contraption the prisoners used to cover up an escape tunnel they were digging. As men dug in the tunnel, other men vaulted over the “horse," pretending to be doing daily exercises.

All the POW stories I’ve read this past year took place in Japanese concentration camps where prisoners were treated quite harshly. It took a bit of mental adjustment to picture the German camps where the prisoners had a very different lifestyle. Sometimes I felt I was experiencing a PG 13 version of “Hogan’s Heroes” (for language and tense situations).

This is a book that keeps you on the edge of your seat.  At times Wooden Horse got my heart to racing so much that I had to put it down and take a break. At other times I skipped over the thrilling details entirely.  Because I never knew what was going to happen next and because I was expending so much emotional energy on the book, I made a rash decision and peeked at the ending. Call me a coward, but it was the only way I could finish it.

A must for fans of WWII literature.  The movie is quite good too.

Posted by hopeinbrazil at 8:16 PM

"This is a book that keeps you on the edge of your seat, but may I tell you a secret? I don’t enjoy that kind of suspense. My idea of excitement is curling up on the sofa with a cup of tea and a much-loved book (one that I’ve read so many times that there are no surprises and the characters are like old friends)."

I agree! This one does sound like a must read for WWII lit fans, though.

Thank you for dropping by my post on Orthodoxy, and letting me know about the book comparing Lewis and Chesterton. I'd love to find a copy.

I'm not a fan of WWII literature but this one sounds very good. Thanks for the recoemmendation.

Hogan's Heroes is one of my favorite shows, so I think I'd like this book.

We posted your review on War Through the Generations.

--Anna
Diary of an Eccentric

Reading WWII lit is about the only interest I don't share with you. My grandfather was an American liberating a concentration camp in Germany and he never really got over the horror. I AM a wimp. It all seems too close.