Committed to Memory by John Hollander 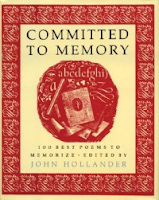 I have been a poetry lover since the Fourth Grade when our teacher had us write and illustrate our own poem books. Unfortunately I was raised in a generation that was not required to memorize any poetry in school. As a homeschooling mom I read poetry to my children (one or two poems before every bedtime story) in the hopes that they would not grow up as deficient as I was.

For years I’ve wished for a book that would put some of the “Poems I Should Have Memorized” in one place. Committed to Memory sounded like just the ticket. After all, its subtitle is “100 Best Poems to Memorize”. Silly me, I assumed it meant “best-loved” poems (as in, poems that most people know and love.) Instead it contained a hundred poems, half well-known and half obscure.

The editor said the selections were chosen for good rhyming (as an aid to memorization) and for length (not too long nor too short). That criteria may have made them more memorize-able, but definitely not more lovable. Not only were many of these poems unfamiliar, most were difficult to understand. And many were downright gloomy.

Luckily for me, my friend Carol at Magistramater just wrote a post about another poetry book, The  Top 500 Poems, that sounds promising.
Posted by hopeinbrazil at 9:34 AM