Save the Males by Kathleen Parker 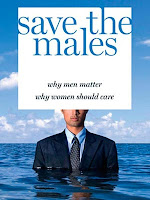 My world view includes the idea that men and women were created differently to complement each other. Obviously, I worry about the push in our culture to emasculate our men and de-feminize our women. In the name of equality we seem to be losing our unique identities.

It’s no wonder that the book Save the Males by Kathleen Parker caught my attention. Frankly, it’s a book I’d recommend only to those who are concerned with the de-gendering of America because it is both profane and sexually explicit – things I abhor in books. Nevertheless, Parker is right on target in many of her assertions and I managed to skim the less savory passages to get to the main ideas. Chapter Seven on women in combat is worth the price of the book. I have never read so many clear cut reasons for not allowing it. One example is the ambivalent attitude of Radical Feminists concerning violence towards women:

“Feminists recognize the vulnerability of women when they are concerned with the plight of women who are victims of domestic abuse…. [yet] their position on integrating combat ranks puts them in the position of saying that violence against women is a terrible thing unless it is at the hands of the enemy, in which case it’s a welcome tribute to women’s equality.” (p. 183)

My conclusion: Everyone understood these things not too long ago and it’s astonishing how muddled we’ve become in our thinking. I recommend this insightful book to those who are troubled about the blurring of gender distinctions in our present day world.
Posted by hopeinbrazil at 8:40 AM

Interesting premise, but the description doesn't match what I expected. Sounds like it would just make me angry, since I am (always have been and always will be) a staunch humanist (broader than being a feminist) & a career civil rights advocate.

Thanks for your candor!

I have a book on my shelf (still unread) called The Feminization of American Culture by Ann Douglas.

It sounds similar to Parker's book.