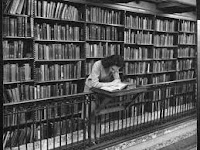 The novel she had once found slow now seemed refreshingly brisk, dry still, but astringently so, with Dame Ivy’s no-nonsense tone reassuringly close to her own. And it occurred to her that reading was among other things, a muscle and one that she had seemingly developed. She could read the novel with ease and great pleasure, laughing at remarks, they were hardly jokes, that she had not even noticed before. And through it all she could hear the voice of Ivy Compton-Burnett, unsentimental, severe and wise.

From The Uncommon Reader (p. 99) by Alan Bennett
Posted by hopeinbrazil at 6:29 PM

I noticed this when I taught Shakespeare to high school students: the first play was tortuous, but by the third they had their literary muscles in shape.

I enjoyed The Common Reader, but feel about it the way I do about the Guernsey Potato Peel Pie book: why, really why?, do we have to bring sexual orientation into it?

I felt the same way, Carol, about both of those books.