South to Bataan, North to Mukden by W. E. Brougher 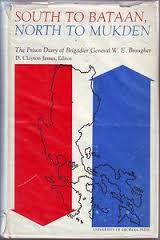 In spite of its goofy title and lack of plotline, South to Bataan, North to Mukden will stand out as one of my favorites of the year. It is the story of General William Edward Brougher and his four years of captivity during WWII. Diaries were not allowed in the prison camps, but Brougher wrote on thin notebooks that he rolled up and hid inside bamboo poles. All but one notebook survived the war.

Brougher was stationed in the Philippines when it fell to the Japanese in April of 1942. He and hundreds of other officers were herded into camps in what he called, “the largest gathering of brass in the history of the war in the Pacific.” (p. 47) For years they suffered from harsh treatment, near starvation, and illness, but the diaries recount their will to endure. Brougher loved to read and to write and used his hobbies as a means of survival. I was touched by the poignancy of many of his diary entries.

July 11, 1943: Issue of one banana each! I was overcome with emotion at the magnanimity of our hosts. Bones in the soup for supper. Potato vines also. They get the potatoes we get the vines. They get the meat, we get the bones! I was “filled” with emotion, but “empty” otherwise.

July 15, 1943: Almost always I find myself under the urge to write – to express in verse or at least in some form to get down on paper some of the sensations and reactions to experiences here in prison camp. A year ago I was well in stride, keeping at it constantly and making some headway… But the time came when I was so reduced in strength and energy through want of nourishing food, our time was taken up with morning and afternoon work on the “farm”, and my feelings were adversely affected by constant abuse of the guards that my feeble sources of inspiration dried up….Also, as time went on, I found it more important to make a good patch on my meager clothing than to make a poem. My patches on my threadbare pants and my little garden patch from which I materially supplemented my pathetically inadequate food issue were my poems of this period.

Oct 15, 1943: Music outside this evening – very nice. Thought a lot of my sweet little wife and how we are going to enjoy life when this misery is over. It shall be one of my principal concerns to discover ways to enjoy the remainder of our lives to the maximum.

I loved how Brougher’s optimism shines through many a hardship: Arrived at this camp one year ago today. Well, I didn’t know that I would still be here on June 8, 1944 – but here I am. And I am better off in many ways than a year ago. In the first place, I have the year behind me instead of ahead of me. And I am in much better physical and mental condition. Have news and pictures of my family and very favorable war news…

I have more thoughts on General Brougher, but will reserve them for a future post. I highly recommend this to WWII history buffs and to those who love a good human interest story.

Posted by hopeinbrazil at 12:27 AM

I need to recommend this to my daughter, who is a huge WW II buff and a history major in college. She just recently started watching "The Pacific"--previously most of her WWII had been Europe-centric.

This sounds really interesting, and I probably never would have heard of it had it not been for your review. I will link to this post on War Through the Generations.