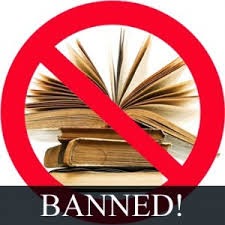 As I surf the book blogging world, I often come across references to book banning.  I haven't paid much attention except to wonder why anyone would read a book just because it was banned rather than because they really liked it.

Tuesday's edition of USA Today had an article about Banned Books Week that I found enlightening. Jonah Goldberg contends that there is no such thing as a banned book in America.  When a parent or a library removes a book from their shelves because it might be inappropriate for a certain age group, that is called  "banning".  But, says Goldberg, even if the book in question is removed, it is widely available for sale everywhere else.

Goldberg points out that schools recognize the importance of parental involvement in their children's education, but then decry the parents' "interference" when they question the choice of a particular book.  Statistics show that one in every 100,000 parents complains about an age-inappropriate book.  Hardly an epidemic. These parents are not saying the book should be banned for all ages and for all time, but just for the slice of time in their kids' lives when some of life's realities may be too harsh for their sensibilities.

What do you think? Is it good parenting or book banning?
Posted by hopeinbrazil at 5:24 AM

Thank you for the reference to the Goldberg article. This well-expresses my own long discomfort at the annual library display decrying so-called "banned books." No, of course I don't want to totally "ban" books, but nor do I think that all books are worthy of being encouraged to all at all cost. Yes, some books just aren't age or audience-appropriate for certain libraries. What is wrong with a library suiting it's collection to its audience? Particularly a young audience which may not have yet learned how to think critically about ideas, judge sources and facts, and form good judgements on their own? I mean, do you really want to put the book on simple step-by-step instructions for quick homemade bottle bombs to be set out as an encouraged school library selection for every middle-school boy?

Of course, the ideal would be that the parent/child relationship is so firmly established that an 11-year-old can see a book on the shelf and know he should ask his Mom before he reads it.