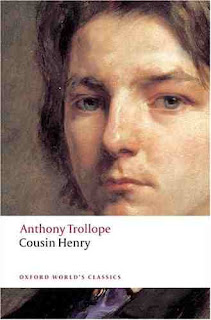 Plot: Beautiful but impoverished Isabel Brodrick is like a daughter to her aging uncle, Indefer Jones. She has been living with him since her father’s remarriage and has endeared herself to all of his servants and tenants.  Although the squire loves Isabel, he firmly believes that his property should be entailed to a male heir and writes a will bequeathing his wealth to his unpopular nephew, Henry Jones.  In the will a sum of money is set aside for Isabel, but by the time her uncle dies no cash remains to fulfill that clause.

After Indefer’s death, two tenants come forward, saying that they were witnesses to a last minute will, which bequeathed Llanfeare Manor to Isabel.  But since no such will could be found, Henry is given the keys to the house and Isabel moves back in with her father and his new family.

Everyone has their doubts about Cousin Henry and the validity of the present will.

My thoughts:  Trollope prided himself in writing unadventurous stories.  But unlike every other Trollope book I’ve read, this one was a real page turner.  No, it doesn’t have any more action than usual.  But it was a precursor to psychological thrillers because the action largely takes place in the mind of Cousin Henry.  Early in the book he commits an error and spends the rest of the book deciding whether he is innocent or guilty.  Can you be considered as guilty for NOT doing something as you could be for doing it?  It’s exciting to see how it all turns out.

Although I liked this book very much, I find I’m getting tired of stubborn heroines.  Maybe it’s because of Gwendolyn in Daniel Deronda (the book I’m reading now).  She (like Isabel from this book and Ayala from a previous Trollope novel) is so set on doing what she wants that she rides roughshod over other people’s hearts.  Oh, well.  A minor quibble over a book that will delight Trollope fans.

Posted by hopeinbrazil at 1:54 PM

Oh, I love Trollope! I'll have to see if I can find this one.

One of the wonderful things about Trollope is that he was so prolific that it's hard to come to the end of his novels. I've read, oh, a dozen? but not this one. I'll have to keep an eye out for it!

Sold to the redhead in the third row! I just finished He Knew He Was Right and I'm ready for more Trollope. I find his novels fill me up (in a good way).

Thanks for the great review! You keep my TBR list full, my friend.

Interesting review. I like a book to be so psychologically interesting that it becomes a page turner.

Carol, your TBR list was already full before you met me! Glad if I can make a suggestion or two. =)

I have not read any of his books. I need to remedy that soon.
Ann