Helmet for my Pillow by Robert Leckie 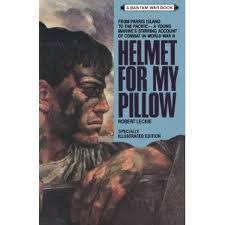 Helmet for My Pillow was originally published in 1957 and was probably reprinted on the heels of the success of another WWII memoir, Unbroken. And it’s a title well worthy of being re-published.

Marine Robert Leckie tells of his experiences in the Pacific beginning with Guadalcanal (Aug 1942) and ending with the first battle on Peleliu (Sept 1944).  I’m used to a fair amount of profanity in books about the war, but even though Leckie does not sanitize his experiences, he describes the drinking, womanizing, and swearing with such discretion that I was able to read his narrative with nary a blush.

What sets this book above many other WWII bios is the amazing prose.  He describes the joys of comradeship, the horrors of battle, and the drudgery of daily life in the jungle with poignancy and consummate skill.  But rather than rave on and on about the book I’ll give you a few samples:

Huts, oil, beer.  Around these three, as around a sacramental triad, revolved our early life at New River.  Huts to keep us dry; oil to keep us warm; beer to keep us happy.  It is no unholy jest to call them sacramental; they had about them the sanctity of the earth. (p. 26)

[The island of] New Britain was evil, darkly and secretly evil, a malefactor and enemy of humankind, an adversary, really, dissolving, corroding, poisoning, chilling, sucking, drenching – coming at a man with its rolling mists and green mold and ceaseless downpour, tripping him with its numberless roots and vines, poisoning him with green insects and malodorous bugs and treacherous tree bark, turning the sun from his bones and the cheer from his heart, dissolving him – the rain, the mold, the damp steadily plucking each cell apart like tiny hands tearing at the petals of a flower – dissolving him, I say, into a mindless, formless fluid like the sop of mud into which his feet forever fall in a monotonous slop-suck, slop-suck that is the sound of nothingness, the song of the jungle wherein everything falls apart in hollow harmony with the rain.

Nothing could stand against it; a letter from home had to be read and reread and memorized, for it fell apart in your pocket in less than a week; a pair of socks lasted no longer; a pack of cigarettes became sodden and worthless unless smoked that day; pocketknife blades rusted together; watches recorded the period of their own decay; rain made garbage of the food; pencils swelled and burst apart; fountain pens clogged and their points separated…everything lay damp and sodden and squashy to the touch, exuding that steady musty reek that is the jungle’s own, that individual odor of decay rising from vegetable life so luxuriant, growing so swiftly, that it seems to hasten to decomposition from the moment of birth. (p. 241)

Read this if you are a fan of World War II history, especially if you have a penchant for fine writing.  One of my favorite books of 2012.

Posted by hopeinbrazil at 5:25 AM