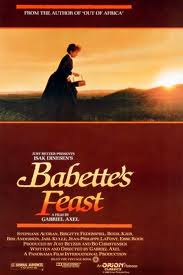 My husband and I just watched Babette's Feast for the tenth time.  It’s been an almost biennial event since it came out in 1987.  The film is in Danish with English subtitles and won the Oscar for best foreign film the year of its release.  It is based on the story by Isak Dinesen (of Out of Africa fame.)  Dinesen first landed on my radar because author Elisabeth Elliot quoted her so often.

Babette’s Feast tells the story of two maiden ladies living in an isolated Danish village.  Their father had started a religious sect, but after his death the members met more out of obligation than out of mutual love.   A poor French woman shows up at their door seeking refuge and though they have no money to pay her, the sisters take her in as their servant in exchange for room and board.

Many years pass and Babette finally has an opportunity to repay the sisters for their kindness.  It’s a remarkable story of grace and lavish love told through the metaphor of food.  A slow moving and sumptuous film.
Posted by hopeinbrazil at 12:54 PM