The Western Canon by Harold Bloom 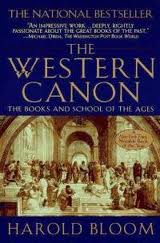 In this 560-page tome Bloom highlights twenty-six writers whose writings set the standard for all literature  that followed them. (Shakespeare, Dickens, Milton, Tolstoy, etc.)

I admit it.  I’ve been in awe of Harold Bloom as the “guardian” of classic literature ever since I first heard about him.  I have struggled through several of his books, but The Western Canon was the last one I’ll ever have to read because it knocked him off his pedestal.  I still appreciate, but no longer idolize, him. It's partly because I’ve become more sure of my own reading tastes and am no longer inclined to swallow someone else’s opinions about what I “should” be reading. It's also due to his disturbing view of the Bible. Although he has tremendous respect for it, he believes the Old Testament was written by a woman and that it has been revised beyond recognition from its original texts. Listen to this gobbledygook:

After Shakespeare, the greatest representative of the given is the first author of the Hebrew Bible, the figure named Yahwist or J by nineteenth-century biblical scholarship.  J, like Homer, a person or persons lost in the dark recess of time, appears to have lived in or near Jerusalem some three thousand years ago, well before Homer either lived or was invented.  Just who the primary J was, we are never likely to know.  I speculate, on purely internal and subjective literary grounds, that J may very well have been a woman at King Solomon’s court… [Probably] Bathsheba, mother of Solomon… The J writer was the original author of what we now call Genesis, Exodus, and Numbers, But what she wrote was censored, revised, and frequently abrogated or distorted by a series of redactors across five centuries, culminates with Ezra, or one of o his followers, in the era of the return for Babylonian exile….J’s Yahweh is human – all too human; he eats and drinks, , frequently loses his temper, delights in his own mischief, is jealous and vindictive, proclaims his justness while constantly playing favorites, and develops a considerable case of neurotic anxiety … By the time he leads that crazed and suffering rabblement through the Sinai wilderness, he has become so insane and dangerous, to himself and to others, that the J writer deserves to be called the most blasphemous of all authors ever. (p.4, 5)

Really? When you read drivel like that about a book Bloom considers to be one of the absolute greatest in the Western Canon, how can you continue to hope that his other thoughts will be enlightening?

But Bloom isn’t considered the Protector of Great Literature for nothing.  He believes (and rightly so) that great literature will continue to exist, not because it’s “good for you”, but because true readers actually enjoy the stuff.  Sadly, however, (and he’s right again here) colleges and universities will have less and less lit majors.  What are now called “Departments of English” will be renamed departments of “Cultural Studies” where Batman comics, Mormon theme parks, television, movies, and rock will replace Chaucer, Shakespeare, Milton, Wordsworth, and Wallace Stevens. (p. 484)

Dismal but true. This book is worth skimming through to find out why the Great Books are worthy of the name.

Posted by hopeinbrazil at 6:25 PM

Drivel is the correct word. His speculations remind of what I've read about The Da Vinci Code, pure imagination disguised as fiction disguised as legitimate theory about something the author knows little or nothing about.

I agree with Sherry!

And I agree with Sherry as well!
I know very little about Bloom and haven't read any of his books, but I did start to read Alan Jacob's The Pleasures of Reading in an Age of Distraction and he quotes Bloom and seems to find some room to question his literary tastes and rational at times. So it wasn't surprising to read that quote, but how stupid really.