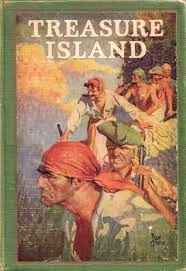 "Them that die 'ill be the lucky ones." - Long John Silver

Treasure Island has never been high on my priority lists, but Heather piqued my interest in the audioversion when she left a comment on an earlier post.  She mentioned that Adrian Praetzellis had done an excellent job of reading several classics at Librivox so I popped over and downloaded three of his books.

The first was Treasure Island. Mr. Praetzellis catches you off guard when he begins because his voice seems so dull and uninteresting. But don't worry, it's a ruse. When he gets started on the pirate's voices, he's absolutely amazing. His reading of Long John Silver is spot on, succeeding in conveying both his dastardliness and his charm.

The story itself held few surprises since I'd read the Classics Illustrated comic book version a hundred times as a child and have seen various movie versions (the latest being Treasure Planet). Still, it's a pleasure to listen to any book with engaging characters that's well-written and well-narrated.

I especially liked the fact that Jim Hawkins is a kind of Frodo-figure. He's a little boy in the midst of adult good guys (the doctor and the squire) and bad guys (the pirates) and manages to be in the right place at the right time to be the hero of the story.

For families that read/listen together, these audio chapters are broken down into half hour chunks which would make this book a nice evening activity. (Maybe a bit too exciting for pre-bedtime if the kids don't already know the story.)

Thanks, Heather! I look forward to further listening from Mr. Praetzellis.

Posted by hopeinbrazil at 6:03 AM

I just listened to the first chapter of Treasure Island. I really enjoyed it so thank you so much for recommending it on your blog.
I really do enjoy the titles that you share. Some I know but others I can't wait to get acquainted with. So thank you very much.

I like the comparison of Jim Hawkins to Frodo--interesting to think about. I'm due for a reread of TI myself, and I like LibriVox so I'll be downloading the version you listened to.

I didn't read many Classic Comic Books myself, but I vividly remember one of Stevenson's The Black Arrow, which I absolutely loved. Ah, the memories!

We shall add this to our must-listen (er, read) list!

I'm so glad you liked it!

We're looking forward to listening to Adrian Praetzellis' reading of Kim by Rudyard Kipling this summer. (We have to wait until school is done or we start listening at lunch time, and soon half the afternoon is gone!)