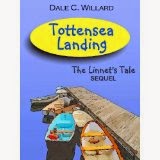 Dale C. Willard's The Linnet's Tale was one of my favorite books in 2013 so I was anxious to get my hands on the sequel. Although I bought Tottensea Landing  soon after finishing LT, it took me many months to get around to reading it. And that was a problem.

A year later I couldn't remember the characters and the author doesn't bother to reintroduce them. It would have been good for him to explain who was who - not necessarily in great detail, but with an occasional clue.

Willard is a wonderful writer, however, and the book has moments of real charm. At the end of the first book, the mice are forced to leave their homes because of a cat. Now they are building a new life for themselves at Tottensea Landing. Some new characters are introduced, including the endearing Flooke sisters who come from "the wrong side of the tracks" and are trying to build a new life for themselves. I thoroughly enjoyed Chapter 21 with its vivid story told in a rainstorm. I also delighted in the descriptions of the Harvesters Fair, the rescue of the missing mice, and the courtship between Willy and Molly.