In This House of Brede by Rumer Godden 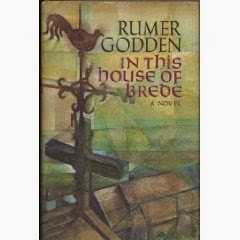 Many reviews (and the 1975 movie) claim that Philippa is the main character in In This House of Brede, but I would disagree. The central figure in the book is Religious Life and it is shown with a gritty realism that keeps this book from being fluffy. (Why, oh why, are Catholic writers so much better at this than Protestants?)

Brede is an English benedictine monastary where 90 nuns of varying ages and social classes live, work and pray together. Most took their vows as young women, but some, like Phillipa, entered at a later age. All of them come with baggage that doesn´t just go away when they put on their habits. Godden succeeds in showing that being a nun does not exempt one from petty jealousies, baser emotions and deep longings.

Godden paints the ironies of life with a deft touch: The necessity of coming to the end of oneself in order to find oneself (Matthew 16:25), the closed-in Abbey being a more "spacious" place than the open town, and the desire of the nuns to be separate from the world yet needing to belong.

For those with a religious bent (Catholic or Protestant), this novel gives much to ponder. Philippa became a nun to "give herself away," but found later that she had put conditions on how that should be done. (Oswald Chambers echoes this idea in his devotional book, My Utmost, when he says that God sometimes crushes us like grapes to turn us into good wine. We don´t mind the crushing as long as we can choose the hand that does it.- from Sept 30)

In spite of the lack of action, and my disagreements with some Catholic doctrines, I found this to be a deeply compelling book.

(By the way, I have not seen the movie, but L.L. at the Catholic World Report had this to say about it: The movie is hollow and insipid compared to the novel. The novel is like good cheesecake - dense and rich; the movie is like a jello pudding mix by contrast.)

Two other Godden novels I've reviewed are China Court and Kingfishers Catch Fire.
Posted by hopeinbrazil at 3:18 AM

What an insightful review! I finished In This House of Brede a month or so ago and I was so compelled by the story telling and the book itself. I have never read a book written like this and what I loved about it was the story was told with all of the warts yet, watching it unfold and seeing how each woman unfolded in the life they had chosen. I thought it was a nice picture of the parable of the soils. I really enjoy Rumer Godden and her writing style. She was new to me so I feel as I have found a treasure. I recently finished Black Narcissus which was puzzling to me. I hope you can review that someday. I was unsettled by that one yet it was just as beautifully written. I have never seen the movies. I love that quote by Oswald Chambers. It says to me exactly what I do and what I am.
Thank you,
Kim

What a wonderful review! I started this and really enjoyed what I read, but didn't finish it...probably too big of a book pile at that time. LOL! :) I will have to try it again. Thank you.

I recently read about a dozen books by Rumer Godden, including several children's stories, but long ago it was In This House of Brede that was my happy introduction to her. You make me want to go back to it again! Thank you.

By the way, I also watched the movie of Black Narcissus, which was horrid, and Godden herself said so -