The Unlikely Pilgrimage of Harold Fry by Rachel Joyce 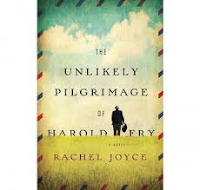 Harold Fry has retired from the brewery and potters through his days avoiding his hostile wife and his painful memories. When he receives a letter from an old acquaintance who is on her death bed, he decides to visit her. By walking 600 miles. This journey will change his life and the lives of many around him.

There are many things to love about this book: the quietly eloquent writing, Harold's faithfulness, the raw honesty of many of the characters, and the balance of heartache and hopefulness. And, of course, "the gorilla man."

A sample from Chapter Fifteen: He had faced his shortcomings and overcome them. And so the real business of walking was happening only now. . . He was no longer afraid. If anything, he was more sure. . . . His walk had become a battle against himself and he had failed [with injuries and false expectations]. Now he followed a set of gentle stretching exercises each morning and rested every two hours. He stopped to study the plants and to treat his blisters. Once more it surprised him how much was at his feet if only he had known to look.

As he learns to pay more attention to his own bodily rhythms and the world's natural beauty, he also learns compassion for his fellow pilgrims.

Harold walked with these strangers and listened. He had learned that it was the smallness of people that had filled him with wonder and tenderness. And the loneliness of that too. The world was made up of people putting one foot in front of the other. And a life might appear ordinary simply because the person living it had done so for a long time. To Harold every person began to look the same as well as unique. This was the dilemma of being human. It was as if all his life he had been waiting to get up from his chair. . . .

My love for the book is not unequivocal. The short, very strong outbursts of profanity rankled me more than usual because I was listening to the audiobook and these words tended to play and replay in my mind. And faith in God is gently ridiculed throughout.

Still, even with the presence of profanity and the absence of Bible verses, Joyce has written a book that Christian authors can emulate. It's a powerful story of brokenness and the longing for redemption. I'm only sorry the ending was as shallow as it was, with it's fluffy ideas about death and the hereafter.

Even with its imperfections, The Unlikely Pilgrimage of Harold Fry is a wonderful look at the beauty and fragility of humanity and man's deep-seated need for love and meaning. If you can stomach the vulgar language, I highly recommend the Audible.com version expertly done by Jim
Broadbent.

Posted by hopeinbrazil at 12:12 PM

I think I'm more bothered with language-issues in audio book and movies. I read this one and enjoyed it as well. Not perfect, but, worth reading.

Thanks for the review. It's helped me decide whether to buy it or just borrow it from the library. I heard there is a second one that comes from his friends viewpoint.

I read this book a while ago.

Great review! It reminded me how much I enjoyed this book.

Thank you for your recommendation. I enjoyed the pilgrimage, as I've experienced a very short one (5 days - 70 miles) recently. I loved how Harold begins to "see" everything around him as he travels light, and how his simple trek opens the way to him receiving everything he needed.