The Golden Road by L.M. Montgomery 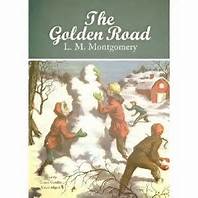 The Golden Road (The Story Girl, book 2) cannot be read as a "stand alone," since Montgomery takes little pains to reintroduce the characters from the previous book. Many former adventures are referred to so it would be good to read Story Girl and Golden Road back to back.


In the first book I laughed unkindly at the ever practical Felicity in comparison to the whimsical, delightful Sara Stanley. But in the second book I saw how important she was to balance out the wildly imaginative characters. Because she was less vocal in the second half of book two, it was too sentimental for my tastes.
But the humor was still there. One of Peter’s New Year resolutions is to refrain from unkind remarks to his sister, but what he does instead is laugh-out-loud funny.

And the beautiful writing: Our summer was over. It had been a beautiful one. We had known the sweetness of common joys, the delight of dawns, the dream of glamour of noontides, the long, purple peace of carefree nights. We had had the pleasure of bird song, of silver rain on greening fields, of storm among the trees, of blossoming meadows, and the converse of whispering leaves. We had had brotherhood and wind and star, with books and tales, and hearth fires of autumn. Ours had been the little loving tasks of every day, blithe companionship, shared thoughts, and adventuring. Rich were we in the memory of those opulent months that had gone from us – richer than we then knew.


We don’t really find out what happens to the children when they grow up except through the Story Girl's shrewd predictions. We can assume things will play out as she suggests, but the open ending left me a little sad. Maybe that was what Montgomery wanted to convey. The Golden Road of innocent and carefree youth must have its end.
Posted by hopeinbrazil at 11:57 AM

I didn't know Sory Girl had a sequel. I really enjoyed Story Girl. I'll have to look for this book and re-read Story Girl to refresh my memory first. I love Montgomery's writing.

That is a beautiful quote.

I never read the first book in this series, but am very interested. Thanks for sharing this book on Literacy Musing Mondays.