What I Read and Watched in May

It's been a month of decluttering, packing up the house, and saying goodbyes as we head to the U.S. for home assignment. My brain was going in 20 directions per minute so reading anything heavy was out of the question.

1) I listened to Hurricane Season by Lauren Denton, which was wonderfully narrated. There were several discreet references to sex which probably wouldn't have bothered me if I'd read them, but listening to the couple talk about it felt a little like voyeurism. 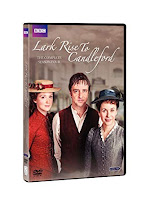 2) Alias the Saint - A rather weak entry in The Saint series by Leslie Charteris
3)  The best book of all was Eugene Peterson's Take and Read, a delightful list of recommendations of worthwhile books.

On the movie front, we endured the 3rd film in the Hollow Crown film series, Henry IV, part 2. My husband said he appreciated having the background for Henry V (his favorite), but I am glad I never have to watch it again. The acting wasn't that great and the script is not Shakespeare's best. Add an unnecessary sex scene and you get a wasted Friday evening. The sequel, Henry V, was much better, but quite different from the Kenneth Branagh version. We also watched some Perry Mason and we thoroughly enjoyed the last few episodes of Season 4 of Larkrise to Candleford. Once again, I was impressed by the message that you see NOWHERE else on television - that real love is costly and yet worth the price.

Posted by hopeinbrazil at 6:34 AM