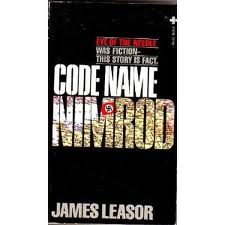 I hate to admit it, but I first heard about this spy on an episode of Hogan's Heroes. A quick internet search showed me that he had indeed existed, and I immediately purchased a 99 cent copy of James Leasor’s biography of Stephen Rigby, alias Nimrod.

Code Name Nimrod is the story of one man’s involvement in one of World War II’s greatest deceptions. He was a member of a secret organization formed by Earl Mountbatten called “X-troop”. Mountbatten needed men who could speak colloquial German, read German documents and interrogate German prisoners. They must also understand German psychology, so he suggested to Mr. Churchill that he should form a Troop of anti-Nazi German, Hungarian and Austrian volunteers. They were all technically enemy aliens and understandably, were almost all Jewish. (p.3)

Thus the scene is set. Through a thousand deceptive actions and messages Hitler is made to believe that the Allied assault will happen at the Pas de Calais and not at Normandy. As a confirmation of these messages Nimrod is dropped into France masquerading as a German spy with vital information about the upcoming invasion. If the Germans take the bait, Panzer and infantry divisions will be posted elsewhere, leaving Normandy virtually undefended and greatly reducing casualties on both sides. This book details the success of the mission.

I have noticed that books about the Second World War don’t often fit the “beautifully written” category. For one thing, the subject is too gritty. Secondly, many books are written from eye witness accounts or painstaking research, neither of which assumes that the author is an engaging writer. (One exception was war correspondent, Ernie Pyle.) What keep the reader going are the fascinating facts. How Nimrod escapes from the Germans after the invasion is hair-raising enough, but did you know that most of the world knew about D-Day before Hitler? (He normally slept till noon and his staff was too terrified of him to disturb his routine.) I was intrigued by Leasor’s sympathetic portrayal of Field Marshal Rommel as a man who inspired (rather than forced) faithfulness from his men and as someone who disagreed with Hitler on many points. I plan to do further reading on that.

If you are not a WWII buff, this book may seem a bit dry, but it’s definitely worth a look if you’d like to know more about a fascinating piece of war history.

Posted by hopeinbrazil at 12:31 PM

This one sounds really interesting. Thanks for the review.

We posted an excerpt here.

--Anna
Diary of an Eccentric

I actually learned about Nimrod on Hogan's Heroes, too, and it immediately interested me. It reminded me of a book called "The Scarlett Pimpernel" by Baroness Orczy which might be a good read if you like things like this. I highly suggest it.

The Scarlet Pimpernel is a favorite of mine. I guess that means a good hero makes a great story in any genre. =)

I too learned of Nimrod on Hogan's Heroes and just googled it to learn more, thanks for the review, I will be on the look out for this book, sounds intriging. SLW

This book was originally published as "The Unknown Warrior" and is now available as an ebook. It is available from http://www.jamesleasor.com/the-unknown-warrior-also-published-in-paperback-as-x-troop/

Funny...I just finished watching that Hogan's Heroes episode (season 4, The Missing Klink) and when I googled Nimrod I came up with this! I'll definitely be reading this book.