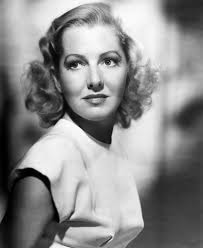 I first saw Jean Arthur in a WWII era film called “The More the Merrier”. I was charmed by her comedic talents, her beauty, and her on-screen vulnerability and wondered how such an appealing star could be virtually unknown. (Was she outshone by her fabulous male co-stars?) Since my first exposure to Arthur I’ve hunted down about a dozen of her other films. Most are so engaging that I’ve watched them several times. Recently I enjoyed viewing her opposite Cary Grant and Ronald Coleman in “The Talk of the Town" (1942). When a charming fugitive, a beautiful teacher, and a stuffy lawyer are forced to become roommates, their unconventional relationship is suddenly The Talk of the Town in this madcap romantic comedy… The zaniness never stops as the three of them dodge the cops, try to snag the real crooks and discover along the way that both men have fallen for Nora. (from the VHS cover)

Imagine my surprise when I looked up a photo for this post and saw Miss Arthur portrayed as a pin-up girl. This was not the Jean Arthur I knew and loved – the beautiful, wacky young woman you’d be proud to take home to your mother. On the other hand, the eleven Arthur movies I’ve seen were some of the last she ever made. Maybe she was a femme fatale in the other eighty-one. I’ll probably never know since many were silent films.

If you like good, clean fun in a movie, you may enjoy these romantic comedies. A list of my five favorites:
1) A Lady Takes a Chance – with John Wayne
2) A Foreign Affair – with John Lund and Marlene Dietrich
3) The More the Merrier – with Joel McCrea
4) The Talk of the Town – with Cary Grant and Ronald Coleman
5) Only Angels Have Wings – with Cary Grant
Posted by hopeinbrazil at 5:01 PM

I loved "The More the Merrier." Have you seen "You Can't Take It with You" with Jean Arthur and Jimmy Stewart? It is probably one of my favorite films. Of course, not a romantic comedy, but a great Jean Arthur film is "Mr. Smith Goes to Washington." I know she was one of Frank Capra's favorite leading ladies. Great post! I like your taste.