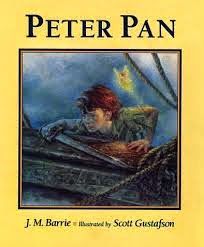 A lot of people don’t “get” this book. That’s okay. I’ve seen Citizen Kane and don’t get why it’s supposed to be one of the greatest movies ever made. I’ve read Alice in Wonderland several times and almost “get” it, but not quite.

Peter Pan, on the other hand, I understand from page one. As soon as you read of the hidden kiss on Mrs. Darling’s mouth and of Mr. Darling’s worries that they won’t be able to afford the children (Tight finances require that they employ a dog rather than a human to care for the children), you know that nothing in the book should be taken too seriously. The people who hate the book point to chapter eleven where Peter is under the impression that his mother had locked the windows when he tried to go home. Since Peter’s faulty memory is highlighted throughout the first chapters, no reader should be horrified at Peter’s imaginary heartless mother. The OPEN window at the Darling house is the one that matters in this book.

Apart from the sly tongue-in-cheek humor which makes the book a pleasure to read, there is second reason why the book is one of my favorites: It’s a fabulous tribute to motherhood. The opening and closing scenes are of the children’s sweet mother (Is her last name just a coincidence?). Our narrator chides her for being so soft on her unfeeling children that she keeps waiting for them after they’ve deserted her. But Barrie’s true feelings come out when he writes, “Some people like Wendy best and others like Peter, but I like their mother best.” Mrs. Darling is the hero.

Throughout the book we have ample evidences of “mother hunger”. Peter Pan and the Lost Boys want someone to care for them and to tell them bedtime stories. Even the PIRATES want that! Just before Wendy walks the plank, Smee offers to set her free if she’ll only be his mother. More than once in Peter Pan, Barrie describes children as “gay, innocent, and heartless”. The mother figures in the book counter balance that image.

Thirdly, I like the book for what it teaches about self-sacrifice. As mentioned in the previous paragraph, motherhood is a principle theme and there’s no refuting the self-denying nature of that profession. Then there is Wendy whose whole purpose for being in Never Land is to look after the boys’ needs (and not her own). Even bratty Tinkerbell drinks Peter’s poisoned medicine to prevent him from swallowing it. And self-centered Peter relents and allows the children to return home when he sees Mrs. Darling’s tears.

This was my fourth time through the book and I enjoyed as much as ever.
Posted by hopeinbrazil at 8:08 PM

My children really, really enjoy Peter Pan. For myself, I really dislike Tinker Bell. I may have to re-read this and focus on Mrs. Darling.

I'm not sure if I saw the Disney movie as a child, or if we just had the record and I listened to the songs, but I've never read the book. This review moves it to my tbr list for sure. Thanks.

I read this book a couple of years ago(primarily inspired by how much I loved the movie Finding Neverland) and I loved it! I loved reading your thoughts on mothers in the novel - I agree, Mrs. Darling was one of the most heart-wrenching parts of the book. Great review!

Great review. It reminds of why I liked this book so much.

My son got this one for Christmas, and I'm anxious to read it to him. Thanks for the review!

I fell in love with Peter Pan as a young girl, and have read it countless times since. Happily, many years ago, I married a Mr. Darling, so I am a realio-trulio Mrs. Darling. Not only that, I have a sister-in-law named Wendy.

Have a blessed day in the Lord!

You know, I read this once (a year or two ago) and didn't like it. But it was because of Peter's general attitude and not because of his mother. =D I prefer the Disney-fied version (which I know will likely drive you up the wall! My apologies!).

I DO plan on reading this with my boys when they are older though because it is a classic for a reason and provides plenty of food for thought!

Glad to read your review of it AND to know that you liked it! It will not be avoided in our house - even though it isn't exactly my favorite.

Oh yes! I read it a few years ago for my Children's Lit class and so enjoyed it. Despite some disturbing elements, it has so much fun in it. And you brought out all the best things in your post.

I have read it once but not really like it. I think my dislike is due to my misunderstanding or something else. I think I should spend some time to reread it. Thanks for your review, it is really amazing.