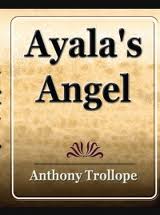 Long-time readers of my blog know that I’m an Anthony Trollope fan.  It takes patience to plow through his (purposely unadventurous) novels, but it’s worth the effort.   Ayala's Angel begins with the plight of two orphaned sisters who are shuffled off to different relatives.  Ayala goes to the rich uncle and Lucy to the poor one.   Both experience culture shock because neither girl has known the stinginess of poverty or the arrogance of wealth.

Lucy tries hard to make the best of her new life, but Ayala does little to earn the affection of her new family.  At first the reader assumes that Lucy is Ayala’s angel because of her sacrificial love for her.  But it isn’t long before we learn that Ayala has a dream of an “Angel of Light” who will come and take her away from the tediousness of her life.

This angel is so huge in her mind that no mortal man can come close.  She refuses the marriage proposal of her wealthy cousin because he is too plebeian for her taste.  Although he is an honorable man, he is unromantic and his pretentious way of dressing is repugnant to her. Later she meets a man who she likes very much, but refuses his proposal because he isn’t as handsome as her imagined angel.  When a third suitor comes on the scene (who is also refused), I shared Mrs. Dosset’s confusion as to “the multiplicity of Ayala’s suitors”.   There is no real explanation in the book as to why this penniless women has such amazing powers of attraction.

Ayala’s Angel is a study of romantic love.   Ayala’s idea of it is so overblown that she almost misses her chance at happiness. “Her dreams had been to her a barrier against love, rather than an encouragement.” (from Chapter 55)  The more practical men in the book are convinced that “Love never put a leg of mutton in the pot,” meaning that financial security is better than romance.  Yet, Frank Houston gives up his gold-digging ways to marry the woman he really loves.

I liked this book, but thought it was about ten chapters too long.  It took twenty hours to listen to all 66 chapters and I tired of hearing about Tom Tringle’s persistence in pursuing Ayala and Ayala’s blindness as to which of the suitors was the real Angel of Light.  (He proposes in Chapter 25 and she finally accepts in 52!)

I would recommend reading this book rather than listening to it.  The audio version drags at times, but when I downloaded the book to re-read some of my favorite chapters, the tedium disappeared.  I chuckled happily through the brilliant dialogue and skimmed over the boring bits.
Posted by hopeinbrazil at 9:02 PM

I love Anthony Trollope's books and I have not yet read this one. Looking forward to it now - thank you for reviewing it!

Your review reminds me that there are many, many more Trollope novels to read. I want to get on it. And this one sounds vintage Trollope.

Free downloads of Trollope makes my Kindle even more valuable to me.

I've never heard of this one by Trollope. Isn't Ayala an unusual name for the time period? It sounds Indian or at least Asian.