Willie and Joe Back Home by Bill Mauldin 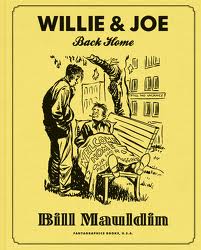 In 1940, 18 year old William Henry Mauldin joined the war effort.  While soldiering he offered to do cartooning for his unit’s newspaper.  His creation of Willie and Joe, two “down-on-their-luck” GIs, would endear him to thousands of fellow dogfaces and win him the Pulitzer Prize five years later (the youngest winner at that time).

During the war, Willie and Joe’s resilience, humor, and camaraderie served as partial redemption for the brutalizing and dehumanizing conditions of their existence (xii).  General Patton reportedly hated the sloppy twosome, but when he tried to stop the cartoons, General Dwight D. Eisenhower stepped in to support Mauldin’s “foxhole realism.”  It was good for the soldiers’ morale to feel that someone understood them and it was good for folks back home to understand some of the hardships of war, albeit in small and humorous doses.  Many of these cartoons were immortalized in Mauldin’s biography, Up Front

Willie & Joe: Back Home  is quite a different story.  Just as Mauldin had championed the cause of the lowly recruits on the battlefield, he came to their defense after the war.  The book’s introduction states: Our collective memory and history books emphasize the national unity of the time, a patriotic and unquestioned support for the cause and those who fought for it.  But the everyday reality was far more complicated…. Most distressing to Bill was the public’s continued ignorance of the special hardships borne by combat veterans, who represented only 5% to 10% of uniformed personnel.  As he had relentlessly shown in his Willie and Joe cartoons, the American army was really two armies, one that fought and another that didn’t.  Up Front had chronicled how those farthest removed from combat claimed the lion’s share of benefits: alcohol, ribbons, promotions, good clothing, hot baths, decent food, entertainment, black market luxuries, and women.  Bill was stunned to see this disparity extended to the home front… The real Willies and Joes were isolated, in the shadows, misunderstood and overlooked, alienated survivors out of 100 million dead worldwide. More serious were the economic disadvantages that former dogfaces suffered.  While engineers, journalists, draftsmen, and clerks had acquired skills in the army that gave them a leg up on the competition at home, riflemen had gained little useful experience and had a far tougher time finding jobs than other veterans.

Mauldin post-war cartoons were extremely hard-hitting and divisive and his career took a nose dive as paper after paper dropped his column.  Reading the book’s intro is essential to the understanding of many of the drawings.   They are the work of a gifted but disgruntled artist and, frankly, they’re depressing.  However, I recommend the book to those who are interested in WWII history because of Mauldin's fame, and also because it reveals many of the prevailing attitudes of post-war America.

Mauldin won two Pulitzer prizes for his cartoons and some say he should have won a third for the one he drew on the day of President John F. Kennedy’s assassination.

Youtube has a short video of his cartoons (unfortunately, most captions are cut off) and also a four minute tribute.

Posted by hopeinbrazil at 6:31 PM