In Defense of Food by Michael Pollan 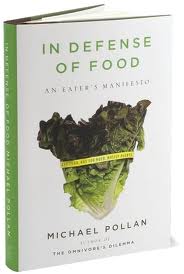 I’m probably the last person on the planet to read In Defense of Food, but I’m glad I finally got around to it.  As Pollan himself states in the introduction, the fact that anybody has to write a book emphasizing the need to eat real food rather than processed food, shows how mixed up we’ve become.   There are no earth-shattering truths here, but we’ve become accustomed to so many lies from food manufacturers, that Pollan’s reality check is fresh and interesting.

He begins by debunking “nutritionism,” which he calls an ideology and not a science. When nutritionists began breaking foods down into nutrients and vitamins and isolating certain nutrients as “super” and others as “harmful,” they opened the door for food manufacturing.  Suddenly anything could be injected with the proper nutrients and come out a “health food.”   By the same token, nutrients that are out of fashion (carbs or cholesterol) could be eliminated from these food products.

The typical whole food has much more trouble competing under the rules of nutritionism, if only because something like a banana or an avocado can’t quite as readily change its nutritional stripes. (18)

It’s a whole lot easier to slap a health claim on a box of sugary cereal than on a raw potato or a carrot, with the perverse result that the most healthful foods in the supermarket sit there quietly in the produce section, silent as stroke victims, while a  few aisles over in Cereal the Cocoa Puffs and Lucky Charms are screaming their newfound “whole-grain goodness” to the rafters. (40)

Pollan goes on to say that we’ve become so obsessed  over the latest scientific discoveries (Think “antioxidants”) that many have developed “orthorexia”, an unhealthy obsession with healthy eating.

So this is what putting science, and scientism, in charge of the American diet has gotten us: anxiety and confusion about even the most basic questions of food and health, and a steadily diminishing ability to enjoy one of the great pleasures of life without guilt or neurosis. (80) Instead of worrying about nutrients, we should simply avoid any food that has been processed to such an extent that it is more the product of industry than of nature. (143)

Except for a couple of silly comments about the evolutionary process, this book is filled with practical and refreshing insights.  Pollan’s parting advice is to avoid food with more than five ingredients (or any food that your great grandmother wouldn’t recognize).   I’ve enjoyed putting it into practice.
Posted by hopeinbrazil at 7:14 PM

I've heard of this one for quite a while also but haven't read it. Looks like I need to pick it up.