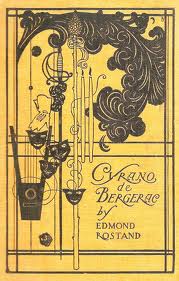 Plays are difficult to read, but Cyrano de Bergerac  is worth the effort.   You must make yourself “listen” hard to the voices in the opening scene as many characters are introduced.   As the play continues and the principal characters are highlighted, it becomes much easier to follow. The clever dialogue is a delight.

Cyrano is a French soldier with a reputation for wit and bravery.  And a very large nose.  He is in love with the fair Roxanne who likes him as a friend and who enlists his help to get the man she loves, Christian de Neuvillette.  Setting aside his own feelings, he agrees to help the two lovers.   His sacrificial love for Roxanne is what makes this an enduring classic.

Rostand’s play is both heartbreaking and hilarious.  My version was done by writer and poet Brian Hooker (1880-1946).  His free verse rendition was the best English translation for many years until Anthony Burgess published his more poetic version in 1980.  I read somewhere that Burgess’ version was used for the English subtitles in the 1990 French film with Gerard Depardieu.

Hooker’s translation may not rhyme, but it is wonderfullly lyrical:

All those [words] that blossom in my heart, I’ll fling to you – armfuls of loose bloom!  Love, I love beyond breath, beyond reason, beyond love’s own power of loving!  Your name is like a golden bell hung in my heart; and when I think of you, I tremble, and the bell swings and rings – Roxanne!  (168)

And what is a kiss, when all is done?  A promise given under seal – a vow – taken before the shrine of memory – a signature acknowledged – a rosy dot over the “i” of loving. (174)

Well – when I write my book, and tell the tale of my adventures – all these stars that shake out of my cloak – I must save those to use for asterisks. (187)

The most famous movie versions are (1) the José Ferrar film from 1950, (2) Steve Martin’s distorted version in 1987 called Roxanne, and (3) the French version in 1990 with Depardieu.  I was pleased to stumble upon an obscure 1946 adaption starring Hume Cronyn which is set during World War II.  It is called A Letter for Evie and it is fun and romantic.
Posted by hopeinbrazil at 3:24 PM

I've seen this as a play but I've never read it before. I love the story.

Very good point about making yourself listen when reading a play. I always try to imagine it being spoken, and it becomes so much richer.