Blackout & All Clear by Connie Willis 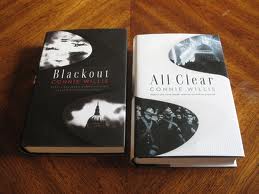 I had seen rave reviews of Connie Willis’ book To Say Nothing of the Dog on the blogosphere, but knew nothing about her Oxford Time Travel series until Sherry recommended it to me.

Blackout and All Clear deal with British historians from the year 2060 who travel back in time to observe England during World War Two.  Willis is a good story teller and the reader soon becomes engaged in the lives of the characters.  And because Willis has done her research, these books are a painless way to learn many historical facts about the war.

Polly, Eileen and Mike have varying assignments.  Polly is a shop clerk during the Blitz. Eileen works with child evacuees in the British countryside and Mike is sent to observe “true heroism” at Dunkirk.    It is fascinating to watch the historians switch from observers to participants as they become deeply concerned about the people with whom they are sharing bomb shelters, living spaces, and war duties.  In fact, Eileen keeps missing her “drop” (time transport slot) because of the needs of the many children for whom she is caring.

Interspersed with bombings and missed drops are lighter moments with the incorrigible Hodbins (brother and sister), the Shakespeare-quoting Sir Godfrey Kingsman, and the crotchety landlady, Mrs. Ricketts. Anyone familiar with WWII history will know the importance of St. Paul’s Cathedral as a symbol of English endurance.  Willis weaves this theme into her book and includes the added dimension of a particular painting within the cathedral.  The painting theme and the strongly Christian theme of self-sacrifice counterbalanced the sparse yet difficult-for-me-to-swallow profanity.

At the end of the first book the historians are having trouble finding any drops that are working.  They wonder if they have inadvertently altered history and thus destroyed their chances of ever returning to their own time.  It takes book two to explain what went wrong and how they “fix” it. The denouement is surprisingly touching.  Kudos to Willis for wrapping up her story so wonderfully.

A very worthwhile read.  I’m glad I could get it on my Kindle via my U.S. public library.

Posted by hopeinbrazil at 7:36 AM

I love all four of Connie Willis' time travel books!

Becky, what are the others?

Ooh, I've been debating buying these for a while as they are a little pricey but sounds like they're worth it...

I think I really need to read these!

The others are doomsday book and to say nothing of the dog. They are lovely, and Connie is delightful.

As an English teacher who also loves history and especially WWII, I could not put these books down. The literary allusions are really fun.