Nothing Daunted: The Story of Isobel Kuhn 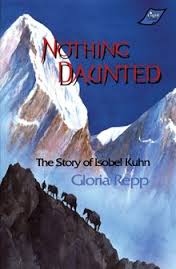 Isobel Kuhn (1901-1957) is one of my favorite missionary writers.  She and her husband, John, served the Lisu people in the mountains of southern China from 1934 to 1950.  Nothing Daunted gives an overview of their life and ministry.  When Isobel and John went to China they had no idea that they would be ousted because of WWII and later because of communism, but God laid it on their hearts to focus on a teaching ministry.  They knew they could never reach the hundreds of Lisu villages by themselves, so they held yearly Bible schools for men, women and teens. These were intensive weeks of training in the newly translated Lisu New Testament.

The Kuhn’s encountered many trials.  Some of their carefully trained leaders died of illness because they lived so far away from medical care. Their daughter Kathryn was sent to a boarding school that was captured by the Japanese during the war. Fighting among the clans threatened to destroy the churches. But John and Isobel toiled on.  When they left China in 1950 there were 17,000 believers.  Because of the Kuhn's insistence on thorough Bible training, the Lisu Christians continued to preach and teach; 50 years later there were 200,000 Lisu Christians.

After you read this book, you should read one of Kuhn’s own books. Green Leaf In Drought is probably the most famous, but By Searching is another gem.

Posted by hopeinbrazil at 6:57 PM