The Setons by O. Douglas 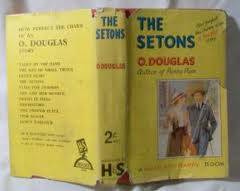 A few months ago I raved about new (to me) Scottish author, Anna Buchan, whose gentle domestic drama Penny Plain was a delightful read.  The Setons had the similiar theme of a close-knit family that loved books, but I didn't enjoy it nearly as much as its predecessor. The opening chapter tells of an informal dinner party where many characters are introduced.  While we are trying to keep them all straight, we finally meet our heroine, Elizabeth Seton, the pretty minister's daughter.  She is a kind and vivacious young woman who is refreshingly free of pretension and guile.


Elizabeth's father, Mr. Seton, comes close to having the same place in my heart as dear Mr. Harding (from The Warden) because of his sterling character.  He is a lover of God's word and an eloquent preacher who is gladly being "wasted" on his little congregation.  Having just read the depressing The Pastor's Wife by von Arnim where everyone was a Christian in name only, it was heartening to read a story of people who were sincere in their faith.

"Pure religion and undefiled," we are told, "before God and the Father is this, To visit the fatherless and widows in affliction and keep ourselves unspotted from the world." If this be a working definition of Christianity, then James Seton translated its letter as but few men do, into a spirit and life of continuous and practical obedience.

Mr. Seton has a particular fondness for the writings of Sir Walter Scott and the family is well versed in Pilgrim's Progress and Cyrano de Bergerac.  Elizabeth explains to one of her suitors, "We were brought up on the Bible and the Shorter Catechism.  In our case, the diet was varied by an abundance of poetry and fairy tales, which have given us our peculiar daftness."

Some readers may struggle with the occasional conversations in Scottish brogue.  The Kindle's built-in dictionary was helpful for many of the words and places that would be unknown to most American readers.  (A "cuddy", for example, was explained as being "Scottish for a donkey or stupid person.")

The book was published in 1917, just before the end of WWI.  The story ends with the advent of the war and Buchan refuses to tie up everything neatly.  Some characters lose loved ones. Men talk of going off to war and to glory, but it is only the mothers who seem to be honest about the horrors of bloodshed.

If you liked Downton Abbey, you'll enjoy this book set in the same period.  There is no servant-filled mansion, but wealthy Aunt Alice does give up her large house to be used as a hospital.

Posted by hopeinbrazil at 6:22 PM

I haven't gotten to the Setons yet. I don't imagine any O. Douglas will be as delightful to me as Penny Plain was.

Thanks for the great review!

I, too, was enchanted by "Penny Plain" and I searched out the sequel, "Priorsford." (Found in the U.K.!)

It was enjoyable but not nearly so much as Penny!

This sounds like a great book and I know some people whom I think would be interested in looking at an author writing about the WWI period. Thanks for the great review!