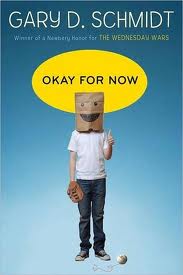 Normally I avoid books about extremely unhappy families and whose protagonist’s main vocabulary words are “shut up” and “stupid.” But having been won over to the YA fiction of Gary Schmidt through The Wednesday Wars, I was willing to take a chance on his Okay for Now.

Doug Swieteck is a minor character in Wednesday Wars, a fellow seventh grader to Holling Hoodhood. In this book, it is now 1968 and he’s heading into 8th grade. His dad has a new job in a new city and Doug is dreading all the changes.  Because of his very broken family, he and his brothers are mouthy and rebellious. In Marysville Doug is quickly labeled a “thug in training.”

A lot of heartbreaking things happen in Doug’s life from the mean trick his father plays on him for his twelfth birthday to the return of his brother (minus his legs) from Vietnam.  I shed many a tear while reading about his life.  I shed happy tears, too, over the grace extended to Doug by several compassionate adults. In so much of today’s media the kids are smart and the adults are dumb.  I loved it that Okay for Now has many sympathetic and wise grownups (an eccentric playwright, an elderly librarian, a kindly science teacher) who help Doug to break out of his hoodlum mold.

The themes of brokenness and wholeness run throughout the story. My favorite part in the book is when Doug decides he is no longer going to contribute to the brokenness all around him. His first step in that direction is just to keep his mouth shut when he wants to say something mean. Interestingly, Schmidt uses a series of Audobon paintings to wake up Doug’s heart and imagination. There’s even a thread about Jane Eyre that I especially enjoyed.

Doug’s philosophy has been that if everything is going right, then disaster is about to strike. As he matures through his experiences, he learns to let go of his fear of the future and enjoy the good things that come his way, which is the inspiration for the book’s title. Instead of, “Things are bound to get worse,” he comes to peace with life when it’s “okay for now.”

Although Doug’s sarcasm will appeal to the junior high crowd, I think many of the references to the 1960’s (filmstrips, space travel, ditto machines) will appeal to older readers. Being familiar with Jane Eyre and John James Audobon made this book quite a treat.

Posted by hopeinbrazil at 1:00 AM

I loved Okay for Now, even better than the Wednesday Wars. I've earmarked his books for my high schoolers to read to get a good feel for the sixties. I think the addition of Jane Eyre and Audobon are like the icing on the cake.

I loved this one, too. I haven't read Wednesday Wars, but I did try to read Lizzie Bright and the Buckminster Boy, but I just didn't like it enough to keep at it. Here's my review of Okay for Now, if you're interested:

I need to try Wednesday Wars again. SOmething, I can't remember what, annoyed me in the first few chapters, and I never read it all the way through. But I loved Okay for Now.