The Man Who Knew Too Much by G. K. Chesterton 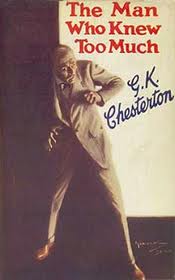 The Man Who Knew Too Much is not a novel as much as it is eight short stories with the same man as their protagonist.  It was written in 1922 and is not to be confused with the Alfred Hitchcock film of the same title about a kidnapping in Morrocco.

Horne Fisher is a rich, seemingly lazy, man who is so brilliant that he solves crimes without much effort. He is described as someone who was "born tired." Yet he is the "man who knows too much" because he is related to several people in powerful political positions and has inside knowledge of how the English government is being run.  Many of the stories have a twist in which Fisher has to let a crime happen (or go unpunished) for the greater good of the country.  Harold March is the journalist friend who gets to watch the mastermind at work.

It is classic G.K. Chesterton with enigmatic phrases ("You never know the good in man until you've seen him at his worst") and surprising twists (especially Chapter 7.)

The original book has 12 chapters but the audiobook I listened to only had the chapters that included Horne Fisher. My version was excellently done by B.J. Harris over at Classic Tales Podcast.
Posted by hopeinbrazil at 12:00 AM

I did think it was the Hitchcock movie. :-) But this sounds really interesting, too. I've read quotes of Chesterton but not one of his books.