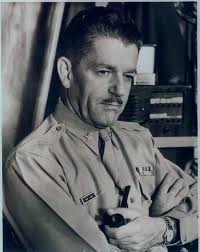 I was fascinated by Brougher’s WWII diary, South to Bataan, North to Mukden, when I read it in 2011.  This was a man who kept his sanity in a POW camp by reading books and writing poetry!  And the snippets of his poems were quite good.  So I was eager to get my hands on his other book, Baggy Pants and Other Stories, which was published in 1965.

I have mixed feelings about the book.  Most of the stories are okay.  Where Brougher really shines is when he’s writing about his experiences in the war.  “Baggy Pants,” “I Was Liberated by the Russians,” and “Rook’s Nest” are exceptional.  “Gangway for the V.I.P” was a bit hokey, but still intriguing in its backhanded tribute to Skinny Wainwright.  Brougher described Wainwright’s defeat at Corregidor with poignancy:  Like Prometheus chained to the rock, the vultures pecking his vitals out, the Old Cavalryman found himself driven underground, Japanese bombers constantly overhead, pulverizing everything on the surface of the Island, and finally forcing his surrender. (p. 76)

While I didn’t love this book, I was very glad to add it to my repertoire of World War II books because of my great respect for General  Brougher’s talents and courage.  Now I’m on the lookout for his book of poetry, The Long Dark Road.

I love your list in progress of favorite books. I'm a voracious reader, too. It's always fun to see book lists and pick up new ideas of what to read.