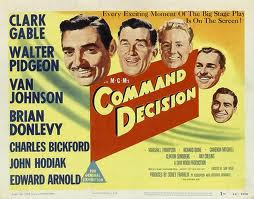 1) Command Decision (1948) Normally, I like movies based on plays because the dialogue is superior.  This one had a bit of a slow start, but got better after the first half hour. Because it is based on a play, there are virtually no action scenes.  So tune into this one if you like to think about the war more than see it.

Storyline:  Brigadier General Casey Dennis has lost too many pilots via bombing missions over Germany and there is a strong possibility that he will be replaced. Tension runs high between the men who oppose him and the men who support him.


Command Decision has an all star cast of veteran actors: Clark Gable, Walter Pidgeon and Van Johnson.  Unlike the pretty boy stars of Air Force (mentioned below), these guys are more weather-worn, and, frankly, they fit the part better than any fresh-faced actors would have done.

2) Air Force (1943) For many years my favorite WWII movies showcased women on the homefront holding their families together while their men were off fighting.  This film shows how far I’ve come in my WWII film journey.  The only female lead in this picture is Mary Ann, a B-17 bomber.  And it’s the story of how she and her crew flew into Pearl Harbor shortly after it was bombed.  The crew heads to Wake Island and then to the Philippines, all the while deflecting enemy bullets.
I really enjoyed this film for the camaraderie and heroism portrayed. (I could have done without the hokey deathbed scene.) The movie was filmed soon after the war began when anti-Japanese sentiment was at an all-time high so be aware that it contains racial slurs. 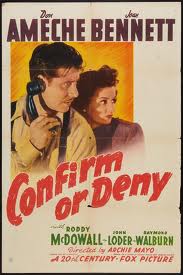 3) Confirm Or Deny (1941) - It's 1940 and London is being bombed to smithereens.  The question is not whether or not the Germans will invade, but when.  "Mitch" Mitchell is an American news correspondent who will do just about anything to get the first scoop on a story. Don Ameche is perfect as the fast-talking "get a story at any cost" reporter.

The movie has a good mixture of light and tense moments. It's a "B" movie with better than average writing and acting. A nice way to spend an evening.