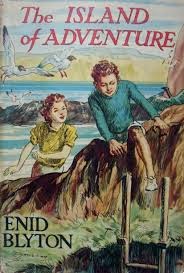 Children's writer Enid Blyton (1897-1968) is a household name in Great Britain, but virtually unknown in the U.S. I discovered her when I lived in Singapore and Malaysia during my childhood. Many years later, on a return trip to Singapore, I combed the used book shops for her titles. The six books I found were read and re-read to my young sons. Our favorite was Mr Galliano's Circus, the story of a boy who finds that working in a circus isn't all fun and games. The Enid Blyton Adventure Series with the four children and their cheeky parrot, Kiki, was also a big hit.

Although not classified as literature, her books are a lot of good, clean fun. Apparently some titles contain stereotypes of that era (1930's to 1950's), but I am not familiar with those books. AbeBooks.com has a nice article on Blyton's contribution to children's adventure stories.

My knowledge of her books is limited to the few we own as a family. Anyone else know of her or have a favorite title?
Posted by hopeinbrazil at 12:00 AM

Well, besides Noddy? :-) Probably her serial story "The Birthday Kitten," which I had as a child in the back of a Playways Annual. Two children rescue a hurt kitten, but have to hide it from their parents--and they also have to deal with a neighbourhood bully who's also a blackmailer (if you don't do this for me, I'll tell your father about the kitten). I thought that was pretty good stuff when I was about seven!

We also read a bunch of her other series books (boarding school books, Finder-Outers) when we were kids, from the public library. I guess she wasn't as unknown in Canada as in the U.S.?

Living in Ontario as well, I have accumulated several of her books from various used book sales, but have yet to read any. Between you and Mama Squirrel, I am inspired to go see what I have and see what else I need to find of her books.

I read aloud The Magic Faraway Tree to my girls a few years ago, and I still remember it fondly. I borrowed it from a friend from the Bahamas who came to the U.S. via Canada.

I nominated you for the Sunshine Award! Check it out on my post here: http://completeandunabridged.blogspot.com/2014/03/sunshine-award.html