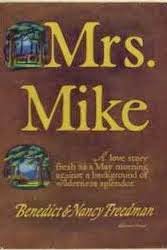 After I read a number of reviewers saying Mrs. Mike was their favorite book ever, I whipped over to PaperBackSwap and snagged a copy. A few months later (as we headed out the door for a few days of vacation) I stuffed it into my bookbag expecting a fun, fluffy read. The first few chapters have a little romance and a lot of humor, so I settled in for a cozy time of it. I did not get what I bargained for.

It's 1906 and sixteen year old Kathy O'Fallon is sent to Alberta, Canada to live with a bachelor uncle because the climate is supposed to be good for her lungs. She falls in love with Mike Flannigan, a Canadian Mountie, marries and moves even farther north. Kathy discovers that her husband not only represents the law, he's doctor, dentist, counselor and jack-of-all-trades. Not only that. Life. Is. Hard. Forest fires, vicious bears, diptheria epidemics, and sub-zero temperatures are just a few of the perils they face.

So it wasn't the light read I was expecting, but it was deeply satisfying nevertheless. Kathy and Mike start with happiness, get sidetracked by tragedies, but fight their way back to joy. I kept thinking their story would make a great movie, and sure enough a 1949 version was filmed. I didn't know till I linked this review to Amazon that there are two sequels: The Search for Joyful and Kathy Little Bird.

As much as I hate swearing, none of the cursing in this book seemed gratuitous. In fact, the funniest scene in the entire book involved a drunk man being made sober by putting his head under a water pump where "profanity and water ran down into the drain." Also, there is one reference to the Indians as "savages," but for the most part Kathy and Mike love and reach out to the Indians.
.
Posted by hopeinbrazil at 12:00 AM

I think I might need to read it again. I sobbed through the whole thing, well except the funny things that I enjoyed.
I was expecting something different than it was I guess.
It was a wonderful story though, of sacrifice and enduring love.
I didn't know there were movies. Thanks for that.
I will be digging through boxes next week for curriculum so I will put that on the list. I always enjoy your book reviews.

Mrs. Mike is one of the cherished books of my childhood. I loved it and read it over and over again. I discovered the sequels a couple of years ago and while I didn't love them like I did Mrs. Mike, they were both thought-provoking and moving.

I've seen this around for years but have never read it. Now I want to!

Thanks for reminding me of this wonderful book! I'm going to see if our library has it, because I would love to share it with my girls.