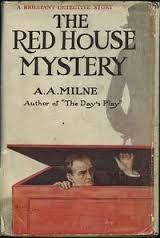 Several writers who are remembered as children’s authors also wrote books for adults. (Dr. Seuss, Russell Hoban, Frances Hodgsen Burnett, and A.A. Milne, to name a few.) Since I’ve been in the mood for mysteries this summer, I was happy to see Milne’s The Red House Mystery was a free download for Kindle.

Mark Ablett is a rich, spoiled bachelor whose only friend is his cousin, Matthew Cayley. Cayley runs Ablett’s estate and caters to his whims. Suddenly one day Ablett’s estranged brother arrives from Australia, someone dies, and the reader is left to figure out who did it and why.

I guessed some of the answers very early on in the book, but that did not diminish my enjoyment of this British mystery. The charm of the book rests on the character of Antony Gillingham, another wealthy bachelor who arrives on the scene just as the murder has been committed. He is a man who likes to experience life and has enough money to dabble in any profession that he likes. He’s been a waiter, a journalist and a shop clerk. And after becoming involved in the investigation, he decides to play amateur detective. His friend Bill Beverly plays Watson to Gillingham’s Holmes and their banter is spot on.

There is some mild swearing.  The English use the word “ass” in a way that we Americans do not. It’s almost a term of endearment when Beverly calls Gillingham a “silly old ass.” It reminded me of the way that Christopher Robin affectionately addresses Pooh as “silly old bear.”

It’s the perfect “cozy mystery” with delightful characters, witty dialogue and a murder with no gratuitous details. A good option for summer reading.
Posted by hopeinbrazil at 12:00 AM

I read this one a few years ago, and I enjoyed it, too. I also enjoyed Milne's autobiography, It's Too Late Now, which you might try if you ever come across a copy:

I remember enjoying this when I read it the first time. I have now forgotten whodunit, which suggests that the time has come to read it again!