Children of the Blitz by Robert Westall 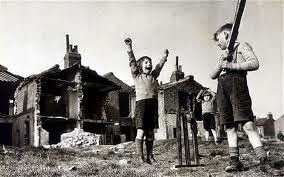 I didn't find the Children of the Blitz; they found me. It began when I wrote The Machine Gunners in 1975; a book about kids in the Second World War who find a crashed German bomber, steal its machine-gun and set out to fight their own war against the Germans.

Thus Westall introduces his book of war-time memories. After the publication of Machine Gunners, hundreds of letters poured in from men and women who had been children during the War and had their own hair-raising adventures to share.

Stories range from how families built their own bomb shelters, to how they stretched their food budget (many through black market purchases), to how kids spent their free time looking for spies or searching through downed planes for war souvenirs. The prevailing emotion of the anecdotes is not fear, but a great sense of adventure. For many of these children the war was a time of much freedom, (Many schools were closed and parents were too worried or too busy surviving to police them.).

Westall knows that memory can be selective and that events can take on larger-than-life proportions with time. So he refers to these stories as "war myths." For every one story that is a hundred percent true, there are probably five that have been wildly exaggerated. But who can verify the facts now? Nevertheless many of the memories match up with events recorded in other books I've read such as London 1945 and The Children's War.
.
I especially enjoyed the stories of POWs since I recently read Morpurgo's Little Manfred, a story of a British family befriending a German prisoner after the War.  In Westall's book, a fourteen year old boy recalls: I remember practicing the piano one afternoon and seeing a German POW, who was engaged in hedge-cutting for the local farmer, spending a long time on the [bush]immediately in front of our house. When we got into a conversation with him, it turned out he had been a cathedral organist in Germany and he was delighted to listen to anyone playing Bach, even a beginner like me..."

This is just one of many astounding stories that will delight lovers of war history, especially as it pertains to life on the homefront.

I've seen this author's books at the library but passed him by. Liked your review so will give him a try.