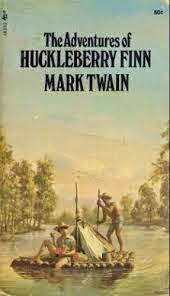 "All modern American literature comes from one book by Mark Twain called 'Huckleberry Finn,'" Ernest Hemingway famously declared in 1935. Considered by some to be the greatest American novel, Huckleberry Finn is definitely not one of those classics you have to struggle through. Twain is a gifted story teller and there is nary a dull moment in this tale of a young boy and his struggle to live free from society's constraints. Plus, a lot of it is laugh-out-loud funny.

Critics of the book fall into two distinct camps. The loudest group calls it racist for it's profusion of derogatory references to African Americans (This is why it has been banned in many schools). The other group insists that Twain was reflecting the language of the times BUT was making a strong case for the humane treatment of black Americans. After all, Huck grows to love and respect Jim, and refuses to return him to slavery.

This idea of allowing Jim to go free was so counter-culture that Huck decides it must be a sin: He writes, "All right, then, I'll go to hell. . . . And I never thought no more about reforming. I shoved the whole thing out of my head, and said I would take up wickedness again, which was in my line, being brung up to it, and the other warn't. And for a starter I would go to work and steal Jim out of slavery again; and if I could think up anything worse, I would do that, too; because as long as I was in, and in for good, I might as well go whole hog." (from Chapter 31)

I listened to the audio version done by Elijah Wood, which was outstanding. My only quibble is that it is easier to skim over coarse language in a physical book, but impossible to do so with an audiobook. Having been taught as a child that the "N" word was profanity, hearing it over 200 times caused a continual pang.

This is my IRL bookclub's last book for 2014. I've never read it but am looking forward to it!

I love this book--I listened to the same recording and that it really well done.

I think Twain's point was to make his readers uncomfortable. :)